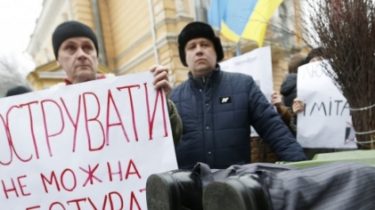 The process of lustration in Ukraine has been 98 percent.

It on a press-conferences were reported by the Director of the Department for lustration of the Ministry of justice Tetyana Kozachenko, UNIAN reports.

“When the lustration law entered into force, Ukraine was 300 thousand civil servants. The level of posts under the ban fell not more than 5 thousand people. Today revealed a little of the persons who at the time, Viktor Yanukovych has held leadership positions and today still continue to work. They are all over the Ukraine not more than a hundred that is not more than 2 percent. That is, the law was implemented,” – said Kozachenko.

According to her, today it is important that ilustrirovannij officials have not been able to return to their seats.

The official noted that the President of Ukraine reinstated 9 people who were subject to lustration. According to Kozachenko, refers to the higher officer command structure of the armed forces, and that one of them is the former head of the Kyiv police Oleksandr Tereshchuk was released under public pressure.