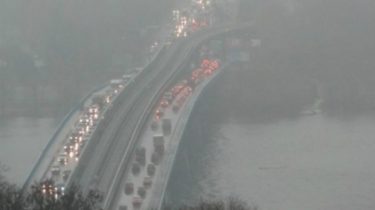 Tomorrow, October 28 in the capital of night and morning fog is expected, in this regard, drivers are urged, whenever possible, to use public transport.

As predicted by weather forecasters, tomorrow in the capital, cloudy weather with clearings, no significant precipitations, Hugo’s wind-the Western 5-10 m/sec.

The temperature at night about 0 degrees, 4-6 degrees Celsius.

In KSCA urge drivers to be careful on the roads of the capital.

See also: Police warned about the peculiarities of driving in the autumn-winter period

Recall that h iseverg in Ukraine will bring rain, sleet, fog and even the sun. In Kiev in the morning, light rain with sleet, rain. Wind East with transition on Western, 5-10 m/sec. Temperature +4…+6°C. This forecast of the Ukrainian hydrometeorological center.

Recorded 170 accidents per hour in the capital. Most accidents happened due to the fact that not all motorists pereobulsya. On a slippery road accidents was not significant. From people nobody has suffered. However, the city was in 9-point traffic. Forecasters predict that the snow in the capital will return at the weekend, and throughout, the temperature will be reduced to zero.