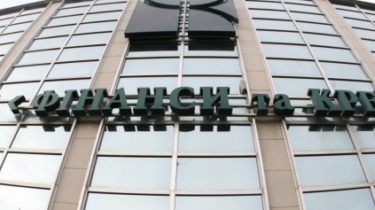 One of the participants of criminal group it is reported about suspicion.

Employees of GPU, of national police and security service has revealed a Scam 1 billion in the Bank “Finance and Credit”.

About this on his page in Facebook said the Prosecutor General Yuri Lutsenko.

According to him, officials of the Bank with non-residents of Ukraine, including an offshore shell company, the ultimate beneficial owner of which is a citizen of Ukraine – a former assistant Deputy illegally derived assets.

27 Oct one of the participants of the criminal group – Demchenko A. I. is reported about suspicion in Commission of the criminal offense under part 5 of article 191 of the criminal code of Ukraine (embezzlement of property in especially large sizes). The law provides for this crime pozbavlennya of liberty for up to 12 years with confiscation of property.

The court chose a measure of restraint in the form of detention with alternative to bail in the sum 41 million 340 thousand UAH.

We will remind, in December 2015, the national Bank of Ukraine on the proposal of the Deposit guarantee Fund of natural persons adopted a resolution to revoke the banking license and liquidation of PJSC “Bank “Finance and Credit”.