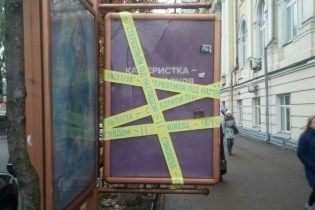 Today sexist posters have already been re-ribbons with the words “stereotypes under the supervision of”.

Provocative sexist posters, which appeared on the streets of Kiev, was the means of attracting attention to an event such as “She Congress” which will take place on 18 November in the capital.

Today, October 28, sexist posters have already been re-ribbons with the words “stereotypes under the supervision of”. That is the slogan, “the She Congress”, where speakers will tell stories of successful women and destroy the stereotypes that may or may not need a woman to achieve in the business.

We will remind, on Thursday, October 27, in Kiev appeared provocative sexist posters. In particular, residents of the capital are actively distributing their photos in social networks. In this case, the posters did not contain any customer or contact information. The posters were signed “the Union of sexist of Ukraine”.