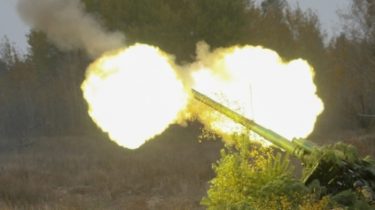 The militants attacked the positions of the battalion “Aydar” in Marinka near Donetsk. Due to the attacks there was only electronics and household appliances, according to a story TSN.19:30.

Fragments flogged field the car, and she left without glass and got holes in the back. “A lot of offers to take her to a Museum or to exchange for two of the jeep – it has become more expensive than it was,” jokes the fighter with the Callsign “Sugar”. The shelling also destroyed the generator, a gas cylinder and a barrel for water. Fighters say that in the near future will have to suffer without “public goods”.

The position called “Uncle nick”, named in honor of the deceased near the Sergeant, the night tried to enter the enemy’s subversive group. It was covered with artillery militants. The attack was successfully repulsed. Did not give up and “Alushta” – the name has raked position. “They beat first sighting, and then probed along the landing,” says the commander with the Callsign “Tooth”. The commander praises his subordinates, because they have the summer began to dig and prepare the area. “Position, fully equipped in engineering terms, in a tactical sense. Strong points of the ready to any active actions”, – commented the head of “Aydar” Maksym Marchenko.

Enemy fire from 120-millimeter mortars damaged equipment, temporarily left the military, and part of Marinka without electricity, water and gas. Suffered one of the Ukrainian military vehicles. But most importantly, convince the soldiers of the battalion “Aydar”, managed to avoid irreparable losses.