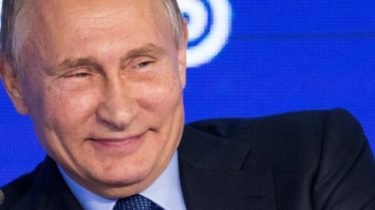 According to him, Russia is committed to respect the right of ownership of foreign investors.

He said this during a meeting of the club “Valdai”, UNIAN reports.

“The factory works, works rhythmically, pays the wages, profits and there are no restrictions associated with the use of the profit, including and with its transfer abroad,” – said Putin.

According to him, Russia is committed to respect the right of ownership and respect of foreign investors, including from Ukraine.

“Peter A. Poroshenko is one of such investors. He is the owner of a fairly large enterprise in the Lipetsk region, factory “Roshen”. There are actually two businesses, the second deals with the implementation of the product”,- said Putin.

According to him, the factory had problems with the payment of VAT, and the judiciary has imposed restrictive measures.

We will remind, the tax Inspectorate of Russia has demanded from factory tax, fines, penalties, and interest in the total amount 374,420 million rubles. In response, the factory has addressed in arbitration court with the claim about recognition illegal decisions of the tax authority and asked the court to issue interim measures. Production at the Lipetsk factory in 2015 fell four times.