The Deputy Gavrilyuk is desired Cossack Cossack was born 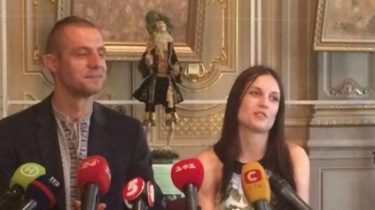 The Deputy Gavrilyuk is desired Cossack Cossack was born

Maydanovsky hero is not upset and happy child with his wife.

Cossack-Deputy Mikhail Gavrilyuk daughter was born. In the family of the baby has been nicknamed the Cossackand the girl’s name is not yet disclosed, according to a story TSN.19:30.

New parents still in the hospital. Wife Gavrilyuk yasmin gave birth in the hospital in Kolomyia, Ivano-Frankivsk oblast. The family say that everything happened according to plan – the child was born on time and quickly. The Deputy hurried from Kiev, to support the mother and be with her.

Michael waited for the boy and hoped that “Cossack will not transfer”. However, the plans did not come true – the girl was born. Her name was decided before the baptism to keep secret. I say only that it is beautiful and Ukrainian. According to tradition, have decided not to show to outsiders and the child. Near the young mother with a baby in Coloma on duty Gavrilyuk and his mother-in-law.

That soon Gavrilyukov will be more – couple told reporters back in may. Say, Gavrilyuk hurried from Kiev in Kolomyya, to support his young wife. While new parents in the hospital, godfather’s mother first talks to TSN about the family addition.