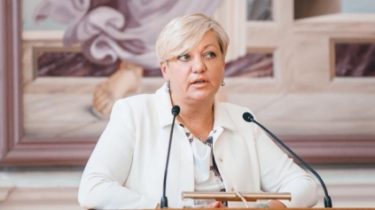 The Chairman of the national Bank holds most of the saving in dollars.

Last year the head of the National Bank of Ukraine Valeria Gontareva received 1,754 million hryvnias of a salary.

This is stated in the electronic Declaration, the heads of the NBU.

According to the document, Gontareva received 1,506 million hryvnias on interest from PJSC “State export-import Bank.” Even 23,518 million hryvnias is specified as the income from alienation of securities and corporate rights from ICU Holdings Limited.

See also: Director of the NABU declared the land in the annexed Crimea and almost a million salary

See also: No apartment, no car: Garden announced its Declaration

According to the Declaration, on account of Gontareva PJSC “State export-import Bank of Ukraine” is 1,831 million dollars, and 61.9 thousand hryvnias in “Oshchadbank”.

Recall that Gontareva told about economic forecasts and what are the positive of the “collapse” of banks. She assured that the macro-financial situation in Ukraine is stabilized, a significant fall of the hryvnia on the foreign exchange market is not expected inflation for the year will be 12%, and the next will be reduced to 8%.

Earlier, the NBU voiced autumn forecast for the hryvnia in the currency market.