The Church, elite hours and 7 squares of living space. The scandalous declarations of Ukrainian officials 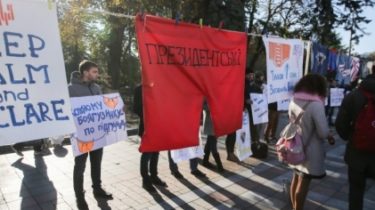 The Church, elite hours and 7 squares of living space. The scandalous declarations of Ukrainian officials

The action near the Verkhovna Rada, October 2016© UNIAN

Until end of submission of electronic declarations has remained a little more than 2 days.

Season filing electronic returns is about to end. Now, in the night of Monday, November 31, the system will not accept information from the Ukrainian holic.

In recent times officials are particularly active. In particular, as of October 28, filed a Declaration of over 70,000 officials.

This is not surprising because late submission of the Declaration without valid reasons shall entail imposing a fine from 1 to 2,5 thousand non-taxable minimum incomes of citizens.

And if the electronic Declaration to submit invalid data, it assumes a fine in the amount of 2.5 – 3 thousand non-taxable minimum incomes of citizens or up to 2 years of imprisonment with prohibition to occupy certain positions within three years.

Although the new law on e-customs Declaration has set clear requirements from the beginning of system start-up not everything went smoothly.

The launch of e-Declaration announced in the summer, but due to the lack of proper certification, everything had to be postponed.

See also: Groisman was threatened with dismissal for failure to launch electronic Declaration

Accordingly, the Prime Minister Vladimir Groysman has threatened the organisers with dismissal if they hadn’t launched a full-fledged system on 1 September. However, even after the launch of e-Declaration would have been an adventure.

The anpc system has repeatedly failed to complain about the officials.

“The Declaration system continues to inspire. Filed document. But when I went into the database to check the look of the filed Declaration, found that the system has automatically copied all the property and monetary assets for me. Immediately began to fill out an amended Declaration. Some of the fields refused to register for half an hour, but finally succumbed,” he wrote in his Facebook the people’s Deputy from BPP Svetlana Zalishchuk.

Her colleague, Mustafa Nayem, complained about the interface of the system, they say, was originally the middle name field was mandatory, and the MP of his birth there. Therefore, in the beginning he failed to fill out his Declaration.

In the NAPC reported that only in the period from 24 to 27 October they received about 300 complaints about the system from MPs, judges and prosecutors.

However, while the Declaration “datapanel”, we decided to gather some of the most resonant data filling in the electronic Declaration.

You can declare the Church

The MP from the Bloc of Petro Poroshenko, Anatoly Matvienko has declared nothing like the building of the temple of the assumption blessed virgin Mary in Berlepsch, Vinnytsia oblast.

According to the document on the website of NACP, the MP took ownership of the building on the fourth of December 2014. Its total area of 40.9 m2.

However, Matviyenko did not specify the cost of the building.

Capital referee “forgot” about mother’s and her cottage

Family owned, the judges of the District administrative court of Eugene ablov — only two apartments with a total value of 8.56 million.

One of them is the son of a judge, and another by the mother. Here are just a mother in the list of relations the judge Ablov not included. 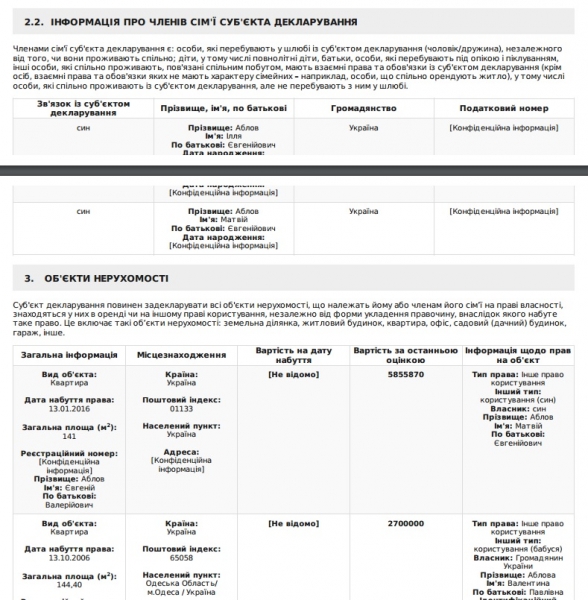 And according to the portal “Our Money”, in the register of real estate for his mother, Valentina Alloway, still, three-storey holiday cottage near Odessa. However, e-Declaration, nor mother, nor the cottage, and the judge did not mention.

A connoisseur of art and a young millionaire Dr

A former member of the “young team” of Leonid Chernovetsky — Oles Dovgy — dropped to 95 paintings, however, did not specify the value of any of them. These works of art Dating from the XIX-XXI centuries.

It is interesting that, in addition to paintings, Dovgy reported on 10-statues 11 wristwatch. However, this is not done, reports “Ukrainian truth” — Dovgy has for 2015 is still $ 1.5 million in cash.

But that’s not all: the “piggy Bank” Dovgy 35 thousand English pounds, 100 thousand euros and 1,7 million hryvnias.

36-year-old MP from the “people’s Will” was also the owner of 100% of corporate rights of private enterprise “KW Management”, which costs 150 million.

It is noteworthy that the wife of long — Ekaterina Gorina — 400 thousand euros in cash.

According to the electronic Declaration for 2015, Gennady Kernes, mayor of Kharkov, the real estate in possession is not. Except that leases of 7 m2 at a certain Vladimir Yarmak, and also 57,3 m2 in the hotel “national”.

The same unfortunate 7 m2 Kernes declared in March this year — the document is freely available on the official website of the Kharkiv city Council.

In the dingy, poorly scanned spring Declaration Kernes has not indicated anything other than his money income, dividends, and so on. For example, the total amount of aggregate income Kernes at that time amounted to more than UAH 15 million.

Dividends are approximately 11 million hryvnias, the salary — more than 60 000 hryvnia.

And six months later the “piggy Bank” Kernes, which is evident from the autumn Declaration, there is also a collection of 11 luxury watches, and does not include the cost of any of them. It is estimated that the cost of one set of hours is in the range of 98 thousand dollars.

A large landowner from the opposition bloc

Denis Omelyanovich, the people’s Deputy from “Oppositional block” has provided different information in paper and electronic versions of their Declaration for the year 2015.

As in the case with Kernes, the Amelianovich in six months “appeared” brand new condition — 45 additional land. 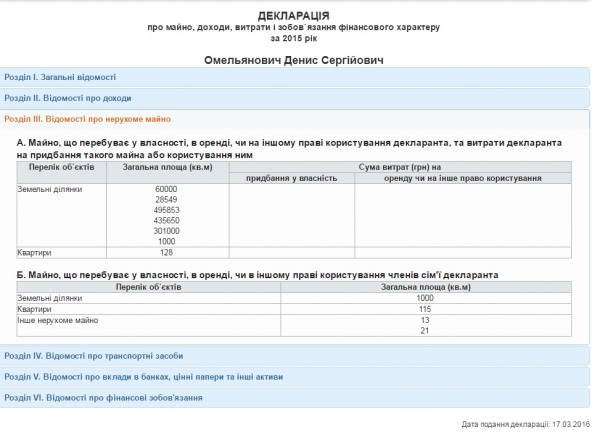 If in the March Declaration at the people’s Deputy from the opposition bloc provided only 7 of land, in an electronic Declaration in October 2016 up to 52. 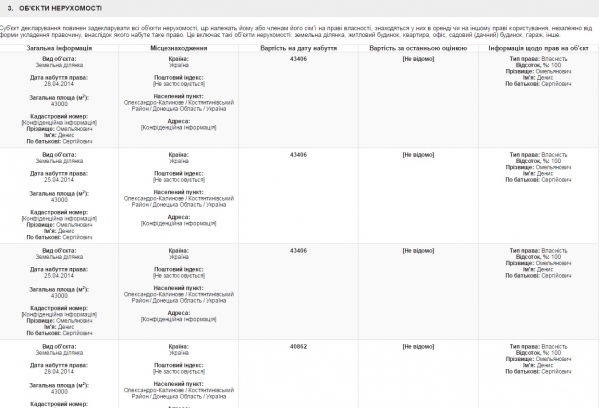 Note, most of the sites Omelyanovich, who is also a member of the Verkhovna Rada Committee on agrarian policy and land relations, located in the Donetsk region.

In e-Declaration for 2015, included in the Unified state register of declarations in September 2016 Svitlana zalishchuk, MP from the PPO indicated the possession of apartments in an area space of 158.7 m2.

All would be nothing if the date of obtaining the ownership of an apartment in the city center near Michael’s and St. Sophia cathedrals would be ambiguous.

In the new electronic declarations is August 27, 2014, by the way, exactly the time when fighting for Ilovaysk in the East. At that time, Zalishchuk the people’s representatives have not yet been. 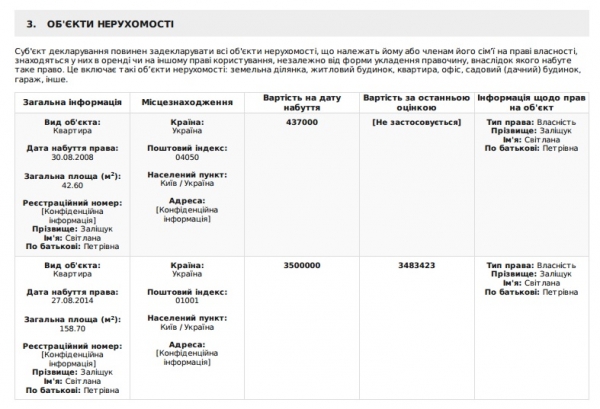 And that’s an interesting point: in the official returns for 2013, which she filed on the day of a parliamentary obligation, that is, 27 November 2014, Zalischuk pointed to the possession of the same apartment (space of 158.7 m2).

That is, from the documents that the apartment that Zalishchuk purchased in August 2014, belonged to her before — in 2013.

To explain this confusion Zalishchuk tried in an interview to movement “Honestly”, one of the founders of that she was. On the question of why in the Declaration for 2013 the MP made the information about the apartment, purchased in August 2014, Zalishchuk said that to confess about his condition was her voluntary decision.

In addition, she said, the document for 2013 the amount of expenses for the apartment she has not made because of personal negligence. 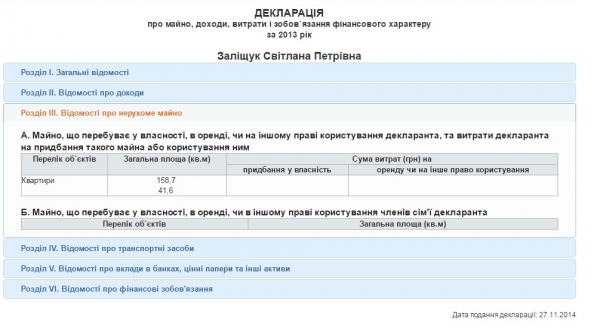 The second discrepancy relates to another apartment Zalishchuk, acquired in 2008. According to the Declaration for 2013 (and spring according to the paper Declaration), its area is 41.6 m2, while the latest document is 42,6 m2.

However, this is minor compared to the issues with respect to the previous apartment. Some Ukrainian media have suggested that the confusion with the date of acquisition of the apartment helped Zalishchuk to divert the public eye from its funding source.

As recently stated by the MP herself, the money for the apartment in Kiev she had her civilian husband, a Swedish diplomat Morten Enberg.

Read also: NAB has announced the results of the validation of the scandal with the purchase of MP Zalishchuk apartments

However, in their Declaration of Enberg as husband Zalishchuk said only in 2015. That is, at the time of acquisition of the apartment was not clear where the additional funds and how they are taxed.

However, in NABOO, after checking into this found nothing suspicious: “funds in the amount of 36 thousand US dollars were provided to most people’s Deputy, the remaining amount of the purchase price was paid at the expense of her civil husband.” But the confusion with dates still confirmed.