The seal of the devil and a witch’s sign: how to recognize a real witch 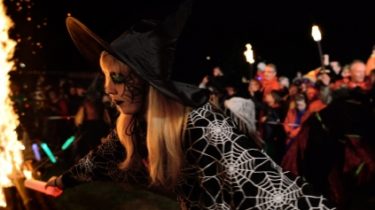 The seal of the devil and a witch’s sign: how to recognize a real witch

The witch hunt that was part of the Inquisition, at the time, killed about 50 thousand people.

On the night of 1 November the world celebrates Halloween. People believe that this mystical night opens the door to the underworld, and the spirits of the dead come to earth to find a suitable body. Therefore, people wear fancy dresses, make “lanterns Jack” and stocking up on sweets to pay off evil spirits.

One of the most common characters for costumes for Halloween is the witch. So one of the most mystical holidays Dnia decided to recall the different ways in which to recognize a witch in the days of the Inquisition.

The best known way to check whether a woman is a witch, was exactly this way. The right hand of the suspect was tied to the left foot and left hand to right foot. Then the witch was thrown into a deep pond. If she was drowning, all charges against her posthumously starred. If she escaped, it was considered a witch, for which she was burned at the stake.

SEARCH PRINT OF THE DEVIL AND THE WITCH SIGN

On the body of the witch or sorcerer was looking for “the mark of the devil”. The judge and the executioners tried to find a suspect in some spots whitish, sores, small blisters. If they were found, pierced with a needle. If people do not feel it found guilty.

Also considered on a witch’s body has a witch sign in the form of a bump or nodule. Demonologists believed that witches used these growths for feeding different spirits with their own blood.

There were many strange modern ways of identifying witches. So, supposedly, you could identify a witch if you throw it in the knife with a cross.

In addition, it was possible to take in the Church Easter egg and so find a witch. However, if she has time to snatch and crush the egg, the man must have broken your heart.

Brought to the Church smeared with fat baby boots was supposed to immobilize the witch.

Interesting was the widespread belief that a witch is different from the rest of the people lower weight. Supposedly that is why she can fly. So often, suspects were checked by weighing.

Witches were also looking for professional hunters. Each of them used to come up with ways to recognize witches. So, the Englishman Matthew Hopkins, one of the most famous witch hunters, in 1645, stated that he discovered his gift to recognize witches. However, his ways were known only to him. For example, he could be awarded death penalty for the woman if the room where the suspect, flew insect.