Almost $ 200 thousand in cash, 7 bikes and a Grand piano. Klitschko announced its e-Declaration 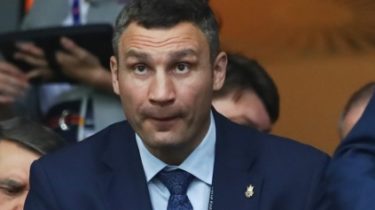 Almost $ 200 thousand in cash, 7 bikes and a Grand piano. Klitschko announced its e-Declaration

The mayor of Kiev also declared the brand “Klitschko” in three languages.

The mayor of Kiev Vitaly Klitschko declared an apartment, Antiques, bicycles and motorcycle. He also has cash of nearly $ 200 thousand and 42 thousand Euro.

As indicated in the electronic Declaration of the mayor of Kiev, Klitschko owns an apartment in Kiev area of 251.8 sq. m, his wife leased a patch of land (2 500 square meters) and building (785,5 sq g) in Lyutizh near Kiev.

Kyiv mayor owns a motorcycle FineCustomPuncher 8.125-4 and trailer IronhorseWidebody, my wife has a Toyota Sequoia and Land Rover Discovery 3.0.

The mayor also declared seven bikes. Klitschko brands like Scott, Cannondale and Coratec. The cost of bicycles not specified in the Declaration.

Among other things, the mayor of Kiev has declared the brand “Klitschko” in Russian, English and German. He owns 50% of the rights, the second half is his brother Vladimir.

The mayor also received 759 UAH interest from the Bank, two gifts in kind at 609 513 UAH UAH, and about 2.6 million UAH from the income distribution.

See also: Dovgy has 95 pictures, $ 1.5 million in cash and a patent in his own name. E-the Declaration of the people’s Deputy

From the Declaration it also follows that Klitschko lent to third parties in excess of 8.5 million euros and 740 thousand dollars. In addition, the mayor has obligations under the insurance 171,8 thousand UAH, his wife is 135 thousand UAH.

Also the Declaration States that Klitschko has made to the election Fund money and personal property for 20 million and 10.6 million UAH.