Association Ukraine-EU: the European Commission called on the Netherlands not to make a gift to Putin 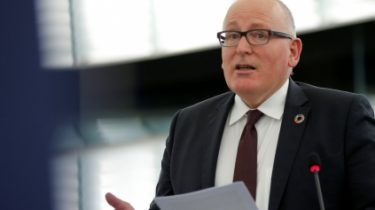 Association Ukraine-EU: the European Commission called on the Netherlands not to make a gift to Putin

Frans Timmermans believes that the interests of the country above the results of the referendum.

The Deputy head of the European Commission and former foreign Minister of the Netherlands Frans Timmermans urged the Dutch deputies not to do gifts, Russian President Vladimir Putin, rejecting the ratification of the Association Agreement between Ukraine and the EU.

This Timmermans said in a broadcast on NPO Radio 1, reports Dutch broadcaster NOS.

Vice-President of the Commission noted that the decision of the referendum is not binding in the Netherlands. According to the official, there is nothing wrong when politicians listen to the voters, but the country’s interests are more important.

“The Advisory referendum allows the deputies to make decisions based on their own assessment. The Netherlands must be the last country that can make a gift to Putin,” – said Timmermans.

See also: the EU believe that the ratification of the Association agreement EU-Ukraine the Netherlands

We will remind, on the eve of Prime Minister of the Netherlands mark Rutte urged the opposition in the Dutch pardamenta to support the ratification of the Association Agreement between Ukraine and the EU. According to him, the rejection of ratification of the agreement will increase the instability in the region. The Prime Minister reminded that the deadline for the announcement of the decision of the government on 1 November.