Lutsenko has his own apartment and holds cash of 150 thousand. E-Declaration of attorney General 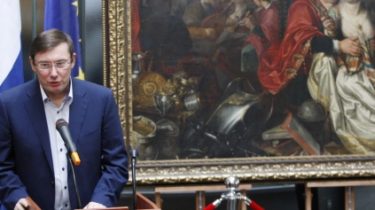 Lutsenko has his own apartment and holds cash of 150 thousand. E-Declaration of attorney General

The head of the GPU is only 20% of the apartment, which is in joint ownership.

Prosecutor General Yury Lutsenko published his income statement on the website of the National Bureau of corruption prevention.

Thus, the attorney General declared an apartment in Rivne with an area of 108.6 sq. m., which owns jointly with his wife, son and brother. In connection with the electronic Declaration, Lutsenko has 20% of the apartment, and another 20% – wife Irina and son Alexander, while 40% belongs to the brother of the Prosecutor General Sergey Lutsenko.

Lutsenko’s son Alexander owns an office in Kiev with the area of 316,8 sq. m. in addition, Alexander Lutsenko took a lease of land plot with an area of 2475 square meters, building area of 859 sq. m. and a garage with an area of 80 sec.Parking the Kiev region, which has the right to use the whole family Lutsenko.

In the Declaration of the attorney General also provided a collection of books of the late 19th and early 20th century, Ulysse Nardin watches, wooden bookcases.

At the same time, Lutsenko’s wife owns a collection of paintings by contemporary Ukrainian artists of the period 2006-2011, Dior bag, watches Breguet, jewelry and fur coats.

Owned by the son of Prosecutor General Oleksandr Lutsenko – a collection of short – and dovgalevskogo bladed weapons countries of Asia, Africa and Europe.

Also Lutsenko’s wife rents car Toyota Camry 2012 release in the “Business center LOTOS”. The right to use this car also has the attorney General.

Wages Yuriy Lutsenko over the past year in Parliament was 75 UAH 562. Also in the Parliament, he received compensation for conducting the parliamentary activities in the amount of 80 UAH 559, funds for trips abroad – 21 670 UAH and compensation for travel – 4 130 UAH.

She also received fees and other payments under civil contracts with LLC “Ukrainian newest telecommunications” – 20 000 UAH, the interest in AB Capital 310 458 UAH, and the income from providing property for rent – 368 000.

See also: Without their own housing, but with money. The former leader of Azov Biletskiy issued the Declaration