Step away from dozens of Forbes. The ex-the battalion commander “Aydar” trillion hryvnia called a joke 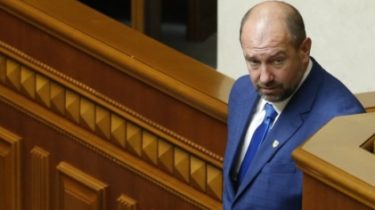 Step away from dozens of Forbes. The ex-the battalion commander “Aydar” trillion hryvnia called a joke

Surrounded by Melnychuk explained that scandalous statement is a bad joke.

In Deputy group “people’s Will” has denied the presence of MP and former battalion commander “Aydar” Sergey Melnichuk, which is included in the specified group, one trillion hryvnia.

About it reports “Apostrophe” with reference to the press service of the group. “It was such a bad joke on his part,” said the spokesperson, adding that the MP himself would later explain in person.

Earlier it was reported that Melnychuk in his income Declaration indicated that he has 1 trillion hryvnias in cash, which amounts to 39.1 billion U.S. dollars.

These findings have caused a great resonance in the information space, since, as noted by the newspaper Deutsche Welle, the assets sravnimy with the state of the billionaires of the top ten richest people in the world famous Forbes.

This amount is slightly less than the assets of each of the brothers Charles and David Koch, owners of one of the largest US private companies Koch Industries. With the same performance at 39.6 billion dollars they divided the ninth place in the Forbes list of billionaires. That is, Melnichuk came to the 10th place ranking.

In addition, Melnychuk pointed in the Declarationthat he owns an apartment with an area of 65.1 square meters in the winery and a land area of 2.45 million square meters in Vinnytsia region.

The former commander of “Aydar” drives a Jeep Grand Cherokee 1994 release and GAS-2411 1988 release, the document says. His annual income, according to the Declaration, is the parliamentary salary in the amount of 73,5 thousand UAH (2,9 thousand dollars).

Recall that the GPU has completed pre-trial investigation in criminal proceedings against the MP and former battalion commander “Aydar” Sergey Melnichuk and five others. it is Reported that Melnychuk and five other persons suspected of committing them as part of the armed gang robberies, kidnapping, misappropriation of the vehicle.

June 3, 2015 elected officials during meeting of the Verkhovna Rada voted for the decision to prosecute the people’s Deputy Sergey Melnichuk. The main article which accused the former battalion commander “Aydar” Melnychuk is the creation of a criminal organization.

Allowed to prosecute Klyuyev and Melnychuk

Now against them can be carried out investigative actions, the Prosecutor’s office, which investigates cases can transfer them to the court. Former Aidar battalion commander Melnichuk the Prosecutor General’s office accused the organization of gang-formation, and even murder.