Parallel world: Ukrainian officials showed how far they are from the people 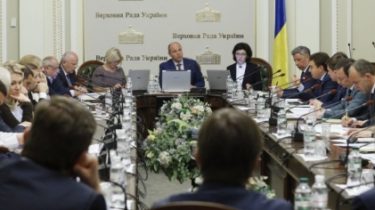 Parallel world: Ukrainian officials showed how far they are from the people

Ukrainians are at risk of swallowing questionable income.

Published by Ukrainian officials of a Declaration shocked the ordinary citizens of the country.

Despite furious resistance of the bureaucracy and several parliamentary attempts to disrupt the website of the National Agency for prevention of corruption continues to collect from the officials of the Declaration on the incomes and estates. Only the pressure of EU and USA allowed the Ukrainians for the first time to legally look into the parallel worldthat intersects with our not. The world – blatantly, incredibly rich. There are millions of cache keeping house, and the houses the size equal to the football field. The world is liberally littered with Faberge eggs, black diamonds, wine by 20 thousand UAH for a bottle or a clock for millions, says the story TSN.Week.

See also: Declaration Zhebrivskyi: shares of the pharmaceutical company and its medical firm

In a parallel world, in which the Deputy Ruslan Demchak declared 133 million hryvnias cash, very far from ours, where there is a war and grandmother can not buy the necessary products. The sarcasm in that Demchak, who keeps the house, and not in the Bank is 300 kg of money (if banknotes of 500 UAH), is not just a Deputy, and the Deputy Chairman of the Committee on banking. “I am very sad that in our country there is a cult of poverty. But I think that it will happen in 40 years”, – said the politician.

In addition, the member declares the Bean of Faberge eggs, and the Deputy Matvienko own Church. The head tax to the Roman Nasirov declares diamonds. From Oles Dovgy – a half million dollars in cash and a collection of paintings by Ukrainian artists. Prosecutor General Yury Lutsenko reported that the free use of a house with an area of 859 meters.

In the last week, when rich officials and politicians realized that declaring no one cancels, began to pick off the thousands of site applications. Monday, October 24, was seven thousand new declarations. Tuesday – another 10 thousand. The website of the Agency for combating corruption could not stand the load and lay down. “The fourth day I’m trying to enter data and natalkivayutsya that the system is down. While the system is hanging, we are ready to put into written form – simply print this form. Notarize that it was. No one is against to drive, but this isn’t enough nerves to the Declaration,” said Anton Yatsenko, national Deputy of Ukraine.

Businessman Alexey Davidenko nothing declared. That legal income is what is missing most of the officials whose salary could not explain the real conditions.

“I thought at first that need to borrow money. The money I have not borrowing. I got the answer that it is not about the money. We are talking about a piece of paper – the contract. So the Deputy could hide behind the fact that he has income which he lent and borrowed money, he bought something. I refused. And then a lawyer in a private conversation said that now it is very popular. In the last week intensified the officials of different ranks who are looking for friends in the business with legitimate income in order to formalize the agreement,” – said Davydenko.

Director anti-corruption Bureau also fill in the Declaration in the last days. Judging from written Sytnyk – not the poor law enforcement. He owns an apartment in Brovary, a land plot in Sevastopol. The wife of the official has Hyundai 2012. Wages Sytnik is 906 thousand. Wife earned 45 thousand hryvnia. The family has a cash of 10 thousand dollars and 250 thousand.

According to Sytnik, the verification of declarations should focus not on NABOO, and the Agency for combating corruption. The detectives NAB will join when they start receiving treatment to verify suspicious officials and politicians, the property of which is higher than the official income. However, the liability applies only to those who bought the property received a gift in 2015.

Vitaly Shabunin – one of those people whose efforts failed to bury the electronic Declaration. We still do not understand what is true rests on our shoulders, he says. Those who declare millions of scared. Bad for them all to tell the truth, lie or even not to Lodge a Declaration is a crime. “If the property is produced in 2015 and it is shown in the declarations. Even if it is obviously corrupt, we never planted. There is no criminal article. If the property is produced in 2015 and is not correlated with the earnings we can plant. If the property, and in 2015, mined previously, is not specified in the Declaration – two years in prison,” – said Shabunin.

In fact, now many officials for e-Declaration is a kind of division of life into “before” and “after”. Even if you now check the bureaucratic good in the NAPC looks like a banal legalization of the income received, each new prirastanie States will be problematic.

For example, in the river family judges and Petrenko are the owners of the Palace with the Church and several apartments. Income from the business, the judges could not be and wages for such luxuries is not enough. In the commercial court, where the wife works, their offices are equipped with locks with electronic keys. Doors are closed, the judges don’t really want to communicate about own property. Both colleagues recently seen at work, however, it is now urgent sick.

It should be noted that now the worst scenario that can be Ukrainians just swallow and digest it all. If dozens of illegal rich are not held accountable, the rest will understand – you can buy palaces, millions to declare or nothing to declare – all the care. Then Ukraine will lose the chance to turn from a random non-parallel intersection of the worlds in General government.