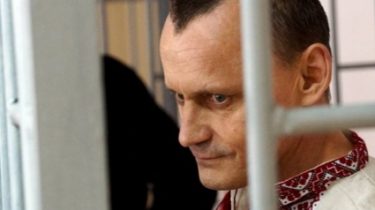 Human rights activists handed over to the European court of human rights, two volumes of documents with detailed descriptions of all violations and brutal interrogations.

Ukrainian political prisoners Stanislav Klich and Mykola Karpyuk convicted by a Russian court on 20 and 22 and a half years in a strict regime colony.

This sentence court of the Chechen lawyers had hoped to appeal in the Russian Supreme court this week, however, the Ukrainians witnessed another blatant mockery of justice, says the story TSN.Week. Stanislav Klich, a Russian political prisoner. Before the arrest was a historian, taught students, and helped elderly parents and talking about babies.

In Russia after the detention he was tortured for the sake of correct readings in room # 18.

A year ago, he gave testimony that allegedly killed Russian soldiers in the Chechen war of the mid-1990s, and fought with him his cellmate Nikolai Karpyuk and Ukrainian politics Dmitry Yarosh, Stepan Poltorak, brothers Tyagnibok and Arseniy Yatsenyuk.

Mom Klich said that he went to Russia for the girl, Victoria, whom he met in the Crimea. She repeatedly came to visit him and they even went to the Euromaidan. One day he received a message: “I’m pregnant. Come.” In August 2014, he left and settled in the hotel, where he was detained. “She is a decoy because we were there really did not want to see. He says: “Mom, I was tortured terribly. I have still been. I’m so lost that I could not hold a spoon – I have everything exactly happened. What they gave, then I signed,” – says the woman.

Cliche was filled with psychotropic drugs, forced to eat hallucinogens, not allowed to sleep, put your bare knees on the stones, pulled a bag over his head, and tortured with electric shocks during the month. “I was tortured for 10 days and current of the wire was tied to his genitals, beat the whole day, waiting until the investigator and he came and supposedly not seen. Wore a bag over his head, choked. 10 days it was done with me, and with Klich do now,” – said Gennady Afanasiev, who managed to return to Ukraine from Russia.

Klich agreed to sign everything that is necessary to the investigation. These abuses, he would write in the year, when the Federal lawyer decoy instead of the independent.

Nicholas Karpuk less tortured because he agreed to sign everything I have to say after he threatened to put under the strain of his 10-year-old son. Every time during the courts he remembered it, he closed his mouth.

Karpiuk was arrested in March 2014 when he, along with two friends allegedly went to the talks in Moscow. Meet had with the people of Putin. Why? The question still remains unanswered. “It was someone from the “Right sector”. He was one of the leaders of “Right Sector”. I have a brother Vladimir, who was in Chechnya during that period, which is in Federal search. Even the words of a brother, and I know a lot of people from witnesses, those people who have been in Chechnya during the second Chechen campaign, all in one voice say that Nicholas was not there,” said friend Nicholas Karpuk Andrew Hominy.

The convicted Ukrainians have an alibi. Karpyuk nursed his sick mother, when Chechnya was a war. Klich attended the University of Shevchenko. A student book with the dates of exams of the Moscow judges did not even want to see and not added to it. Classmates confirmed that Klich was in Ukraine. The only witness against them is criminal in a Russian prison Alexander Malofeev. He’s been serving time since 2009. He said on order of intelligence that fought with the guys in Chechnya, and there was Yatsenyuk, Avakov and Poltorak. He told how they killed Russian soldiers.

Exchange Karpuk and Klich, as at the time of Savchenko, the chance is little. “When the question was raised during the Norman meeting is called, of course, very emotional reaction from the Russian side. We are extremely aggravated and exacerbated the issue of the release after several provocations, including the provocations of the so-called Crimean, which we have just emerged political prisoners. The same gentry, and of course after a history of Roman Sushchenko,” – said Vice-speaker Irina Gerashchenko.

While politicians negotiate, the Ukrainian human rights activists handed over to the European court of human rights, two volumes of documents with detailed descriptions of all violations and brutal interrogations. However, the case could drag on for years. Such political prisoners in the MFA account for up to 40. Nicholas Karpuk from day to day can be transported to any colony. For example, in Siberia or Yakutia, like Sentsov and Kolchenko. Stanislav Klikh leave in Grozny. He will be tried on new charges – for insulting the Prosecutor. His mother is pleased that even, because at least knows where her son is.

Ukrainian political prisoners, Stanislav Klikh and Nicholas Karpuk has condemned: 20 and 22.5 years in strict regime colony. An appeal against this decision did not give anything: the Supreme court looked into it and left the decision in force. What admitted Stanislav Klich and Mykola Karpyuk, it sounds absurd and easy to refute the lawyers, but the Russian court is another problem.