In the popular front, commented on why Yatsenyuk has not filed a Declaration 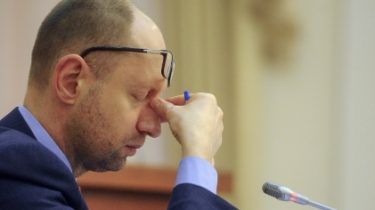 In the popular front, commented on why Yatsenyuk has not filed a Declaration

The politician operates within the framework of the decisions of the National Agency for prevention of corruption, assured of the party.

The head of the popular front, former Prime Minister Arseniy Yatsenyuk and his government Ministers and their deputies laid off before September 1, 2016, must submit the electronic Declaration prior to 1 April 2017.

So, the press service of the party explained why the leader of political force still has not published the document.

See also: Motorcycles, gold watch and offshore. Levochkin has shown that the e-Declaration

“This is consistent with the decision of the National Agency for prevention of corruption “About the beginning of the supply system and the publication of declarations of persons authorized to perform state functions or local self-government” of June 10, 2016. According to the document, officials who have ceased to hold office before 1 September 2016 must submit a Declaration in accordance with the Law of Ukraine “On corruption prevention” within 60 days from the start of the second phase of filing e-returns – i.e. until 1 April 2017″, – explained in “NF”.

Earlier it was reported that the database of the National Agency for prevention of corruption as on the morning of 31 October, no electronic Declaration of the seven deputies. The rest of the 416 parliamentarians reported on time.