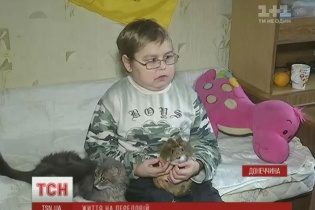 Beware the Guinea pig, but is friends with the cat and the Ukrainian military. Collects cars and wants to go to the moon. His house was broken during the war and for a month and a half boy with a rare disease may be on the street with a three-month nephew, grandmother and called my mother, says TSN.16.45.

97 centimeters tall and 27 pounds of weight. Slavik 22 years old, but a rare disease has not given him grow. It is difficult to move the fingers and knees bent rheumatoid arthritis. So the guy falls a lot.

Slavik lives in the town with the mother, little nephew and grandmother. Best friend – a cat doll. With a Guinea pig Mania friends could not bite. But military and volunteers like the Warbler, they give him the check boxes and the most favorite cars.

Slavko had wanted to be a truck driver, but realizes that it can not work. Because the dream of space.

Slavik from Avdeevka – 22, but it’s hard to believe that he is greater than eight. His house was broken during the war and after six weeks the boy with a rare disease may be on the street with a three-month nephew, grandmother and called my mother.

These guy’s mother, Catherine, the dream of the earth. A removable housing, to stay here the family was allowed until December, then you need to move, but to find an apartment afford that Catherine can’t. Her own home absolutely smashed by the shelling. This happened even before the birth of the smallest in the family – Ilka. His mother, Anastasia, is a student in the occupied Yasinovataya.

Slavko helps to care for the three-month nephew shows cars, includes songs. That’s just every day to walk with a small Thank unable. The apartment is on the 5th floor. Obtained through a volunteer wheelchair – on the ground. Pull the guy on the street you have to ask the military, or neighbors.

Walking Slavka falls infrequently, usually he walks no more than twice a week, but when they bring humanitarian aid, today, you have to go outside twice a day.

Nearby explosions, Ekaterina carries Warbler struggles ahead of them, a long line for washing powder.