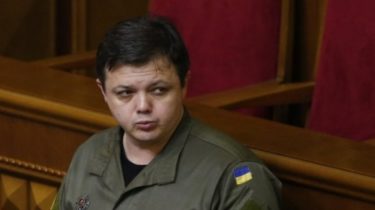 According to the Declaration, the MP live on one salary and with modest savings.

MP from the “Self” and former battalion commander “Donbass” semen Semenchenko live on one salary, and his wife has property in the occupied territory of Donbass and earn credits in two banks.

This is stated in the electronic Declaration of the Deputy.

According to the document, Semenchenko rents a hotel room in Kiev, and his wife Natalia Moskovets rents an apartment in Kiev area of 32 square meters and owns a home in Amvrosievka Donetsk region is a city now occupied by fighters of “DNR”.

The wife of the Deputy rides by proxy on the Nissan nv200, at the MP cars.

Semen Semenchenko wife own the LLC “Regional courier service”. In addition, Natalia Moskovets is the beneficial owner “of the Charitable Foundation Seeds Semenchenko” and public organization “Association of wives and mothers of the fighters of ATO participants” and “Youth for reforms and development”.

The wife of MP earned in the “Charity Fund Semenchenko” 42 427 UAH, and in the organization of the “Association of wives and mothers of the fighters of ATO participants” – 12 thousand UAH.

Also in the Declaration it is specified that as at 31 December 2015 Natalia Moskovets was credit debt in two banks for a total amount of 131 306 UAH.