Shot in the leg and returning to jail. Two stories sentenced to life, who fought for the “DNR” 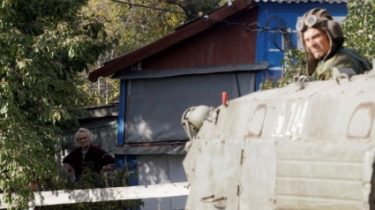 Shot in the leg and returning to jail. Two stories sentenced to life, who fought for the “DNR”

The Ukrainian military has repeatedly seen the prisoners working for the terrorists.

In the Donbass in the captivity of the enemy are still 110 Ukrainian hostages that remain the subject of bargaining for the granting of Amnesty to militants. But the occupied territories are willing to provide people to whom the law was sent behind bars for life. As stated in the story TSN.Week, they have a chance to go free, and to make a career in terrorists.

Recently the Ukrainian side , the militants handed over 23 prisoners, among which 11 criminals who received capital punishment – life imprisonment.

“During the interview with the prisoners we have established that their declining to participate in illegal armed formations of the so-called LNR and DND,” said CID, “Sam”.

The names of some of the agitators in the “prison of the army,” helped to set the prisoners themselves. As noted by life convict Alexander Mikhailov, Aleksandr Savchuk calls himself a Prosecutor on supervision of correctional institutions of the occupied part of Donetsk region. At the same time, when he was Deputy head of the colony No. 52, and from there went to the front of lifetime prisoners.

One of the first signs that the militants are searching for “cannon fodder” in prisons, managed to Avdeyevka industrial zone. In April 2016 the scouts saw on the other side digging trenches, people in civilian clothes, and some of them were in the typical prison uniform.

The former prisoners were taken prisoner and Shirokino. But most often offered to fight pozhiznennikami who have nothing to lose. Body for lifers is 52 colonies in the occupied Yenakiyevo, where 11 the killers gave Ukraine, and the two took the fight. It is, according to convicts, Vitaly Strelchuk and Vyacheslav Verlan, which disappeared from the colony suddenly and unexpectedly for the inmates.

Freedom Strilchuk joined the group of Butler, so the ability to kill him came in handy. “I Strelchuk talked. He said that there came the Russian “Grad”. Everything is computerized. Steel, turned, connected the plug to the laptop, got the coordinates, shot and left”, – says Alexander Mikhailov, convicted for life.

His accomplice, V. Verlan, even managed to make a military career. There is evidence that he became captain of the “army of DNR”. Having won the year shoot at the Ukrainians at debaltseve, Gorlovka and Lugansk direction, both are back under the roof of Enakievo of the colony. More precisely, they are returned to the militants themselves. According to Mikhailov, Verlan tried to escape but he was shot in the leg and returned to jail.

But they are not the first who tried to buy their freedom because of the blood of compatriots. And, unfortunately, not the last. The percentage of prisoners among the militants is no secret to the Ukrainian security services.

Military career: as life prisoners join the ranks of militants

Those convicted for life in the occupied territories received a chance at freedom. The percentage of prisoners among the militants is no secret to the Ukrainian security services. But most of the time the fight was offered a life – to those who have nothing to lose.