The Prosecutor General’s office took over a luxury apartment Leshchenko 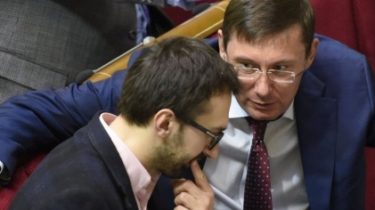 The Prosecutor General’s office took over a luxury apartment Leshchenko

The case began to rassledovat after receipt of parliamentary inquiries.

The Prosecutor General’s office of Ukraine began pre-judicial investigation in criminal proceedings on suspicion of illicit enrichment against the people’s Deputy from the PPO Sergey Leshchenko.

About it reports “Ukrainian truth” with reference to the GPU.

The attorney General stressed that an appeal to investigate the case against “unlawful actions of the people’s Deputy Serhiy Leshchenko” asked the MP Pavlo Pynzenyk. Data were entered in eRDR 27 Oct 2016.

“Initiated pre-trial investigation in criminal proceedings on the fact of illicit enrichment of persons authorized to perform state functions, which occupies a very responsible position. Preliminary qualification of a criminal offence: part 3. 368 2 of the Criminal code of Ukraine”, – stated in the message of the GPU.

The Ministry also said that another parliamentary inquiry to the Prosecutor General of Ukraine Yuri Lutsenko with a request to conduct an audit in respect of flats of deputies Sergey Leshchenko and Svitlana Zalishchuk was transferred to the Specialized anti-corruption Prosecutor’s office on October 18.

The request was sent from the parliamentarians, among them Andrey Lozovoy, Dmitry Linko, Evgeny Deydey, Vadim Podbereznyak and Sergey Kaplin. The MPs argue that analyzed income, Leshchenko and zalishchuk and last accused in the Commission of corruption crimes because, in their opinion, the official income of these MPs would not allow them to purchase luxury housing.

The politician explained that the apartment was purchased for part of the savings as co-founder of “Ukrainian truth”, the loan from the founder pack Olena Prytula and money his lover Anastasia Topolski. Leshchenko said that in 2013-2014, he declared the income in the sum more than 100 thousand dollars.

Later Leshchenko said that Prosecutor General Yury Lutsenko has expensive real estate in the center of Kiev, designed by a bookkeeper his wife Svetlana Ryzhenko. The head of the GPU, these statements are rejected.

Leshchenko showed the apartment where he lives with his beloved, and spoke about the personal and political life

The people’s Deputy told, what sounds in their house, how he met his girlfriend and what was the cause of the first family scandal. Leshchenko was very hurt by questions about borrowing money for an apartment and the meeting of MP with odious persons from political circles.