Dozens of gates and a fence instead of the road: neighbors village of Kyiv region gave the war for the fare 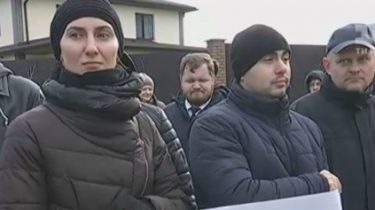 Dozens of gates and a fence instead of the road: neighbors village of Kyiv region gave the war for the fare

The village solid jams due to blocked roads

Neighbor war. Residents of the village Petrovskaya Borschagivka, in the suburbs of the capital, into two camps divided road. Them, the owners of private estates began to block the gates. And when talking about construction of new roads, fenced allotted under it place a metal fence. The patience of those who can’t call an ambulance and half an hour to overcome three kilometers to the exit of the village, burst, says TSN.19.30.

While kids are digging shovels pebbles in the place where should be the road to their house, the adults find out the relationship.

“There’s a communal street, passing by your house when we built, it was the private sector”, – says a resident of the district.

At a meeting with outraged residents of high-rise buildings under construction coming opponents, the owners of private houses. The two camps did not share the road. Since the population in the village increased, the older men decided to fight and barriers. Today there are 38 of them, all visible on the map. And all illegal. This is even the appropriate decision of the village Council there, with orders to dismantle. But the owners do not allow. For blocking of transport communications has opened a criminal case.

And, locals say, were willing to put up with it because they had hope for a new road. It is provided by the General plan and the developer has even found her money.

The gates and fence: villagers in the suburbs of the capital was divided into two hostile camps because of the roads

Road the owners of private estates village Borshchagovka Peter started blocking the gates, and when we are talking about the construction of new roads, fenced allotted under it place a metal fence. The patience of those who can’t call an ambulance and half an hour to overcome three kilometers to the exit of the village, burst.

“This is the road that should go past the high-rise buildings. 600 m long and we are on the Zhytomyr highway. And we have to go around 3.5 km through the village every day. In the village of tube, it is impossible to pass,” say the locals.

Work has almost begun, and here they were again ahead of the private sector, has installed a metal fence. 600 meters to the outskirts of the village with one hand under the gate and prohibitory signs, the other with a gate, very similar to those for more than a year do not open across the street. Who installed the fence, could not figure out, the door opens only one homeowner. Says, to build here the road is dangerous. Because on the one hand, power lines, gas pipeline. Without the appropriate documents for the construction of the highway under their own house do not agree.

“Public hearings. This is according to the law should be, then, in accordance with the General plan done. Project documentation should pass all examinations, to consider the experts to get all the permissions,” says the owner of the house.

So here prefer to make the Park. With the corresponding request has already appealed to the village Council. And the President says is impossible. Without roads in the village would be collapse, my head understands. Therefore, he says, has ordered to the subordinates.

“To invite the police with technology to our utility, to enter the place and to demolish illegal fences,” – said the President.

And while the authorities decide how to run your own decision, people on both sides of the gates are preparing lawsuits to the court by the authorities and the police. Because you are not going to give anybody.