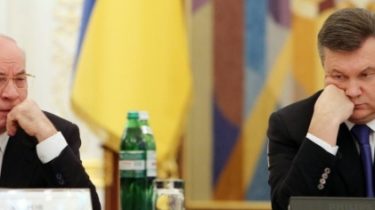 The GPU complain of the Criminal procedure code.

The Prosecutor General’s office of Ukraine stopped the investigation of criminal proceedings against former President Viktor Yanukovych and officials of his regime.

This is stated in the answer of GPU to inquiry people’s Deputy from “Samopomich” Elena Sotnik, a copy of which she has published on his page in Facebook.

In the letter of reply signed by the Deputy Chairman of the GPU Yuri Stolarchuk, States that the proceedings against Viktor Yanukovych, Mykola Azarov, Viktor Pshonka, Vitaliy Zakharchenko and other former officials suspended due to the fact that prosecutors wanted.

Elena Sotnik noted that for such cases, the Ukrainian legislation provides for the maintenance absentia, which does not require the presence of suspects. According to her, “in fact, this situation means that prosecutors can reopen the case only after “find” Yanukovych, Azarov and Pshonka and others. “Criminal power” can sleep…”.

From its part the head of the Department of special investigations of the Prosecutor General Sergei Gorbatyuk explained that the investigation against Yanukovych and his henchmen were stopped, so there was no reason to close these cases.

“The Criminal procedure code is a limited time frame of the investigation – year from the date of notification of suspicion. If the investigation does not suspend, a period will end and the case should be closed,” – said Gorbatyuk in the comment “Ukrainian truth”.

He assured that despite the suspension of the investigation, law enforcement officers continue to collect materials that are relevant to the cases against Yanukovych and company.

Luxury apartments, houses and palaces of friends of Yanukovych

For almost three years, as luxury apartments and palaces Arbuzov, Stawicki, Azarov and others arrested, but so far not seized. Most interesting is that over the years the inaction of the authorities arrested some houses miraculously appear new residents. The journalists of the program “Pennies” will tell you who lives there.