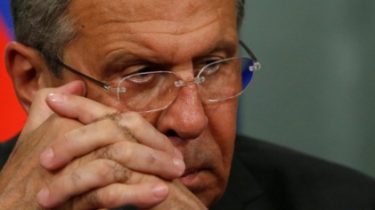 He said that police are dealing with the problem.

The Russian foreign Minister Sergei Lavrov said the provocation detention SBU nand the border with the Crimea two deserters, who, after the annexation of the Peninsula moved to serve in the Russian army.

“We believe that it was an illegal provocation committed by the special services of Ukraine on the territory of the Russian Federation in respect of Russian citizens. Our law enforcement agencies”, – he said.

We will remind, the Russian defense Ministry said that the day 20 November, the SBU detained and taken out from the Crimea on the territory of Mykolaiv oblast of the Russian soldiers – warrant officer Maxim Odintsov and younger Sergeant of contract service of Alexander Baranov. However, in the SBU assured that we are talking about two former Ukrainian military, who changed the oath.

Earlier, Russian media reported that in Russia-occupied Crimea by so-called “court” arrested two people who allegedly prepared diversions on objects of infrastructure of the Peninsula. The Russian Agency said that one of them is that “the Colonel of the Main intelligence service of Ukraine” Alexey stogny, and the second “Ukrainian officer” Gleb Shabliy.