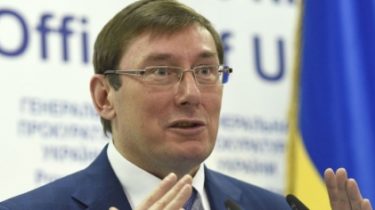 While the international criminal court has legal effect in two cases on the events in Ukraine.

The Verkhovna Rada ratified the Rome Statute of the International criminal court after he proves effective in cases of Euromaidan, the annexation of Crimea and Russian aggression in the Donbas.

This was stated by Prosecutor General of Ukraine Yuriy Lutsenko, reports UKRINFORM.

According to him, the Council took two decisions in which it recognized the jurisdiction of the ICC in the case of the Euromaidan and the events in the Crimea and in the Donbas.

See also: In the Hague for occupation of Crimea with Russia recognized international armed conflict – report of the Prosecutor

“We believe that in this case it is the actions of the ICC will show the feasibility of accession to the Rome Statute as a whole”, – said Lutsenko.

“If now the ISS proves its efficiency in these two extremely resonant for the Ukrainian people cases, of course, I am sure that Parliament will approve the unanimous decision to join a reputable international agreement of the Rome Statute,” concluded the attorney General.

To do this, in the Netherlands flew Yuriy Lutsenko met with the chief Prosecutor of the Tribunal Fatou Bensouda. Lutsenko raised the question about a possible joint investigation of crimes against Maidan. Earlier, the court refused to hear the case, citing the lack of evidence that the attack on the activists was planned.

Rome Statute of the International criminal court was adopted in 1998 and entered into force on 1 July 2002. It should become a permanent body for examining cases of genocide, war crimes and crimes against humanity.

See also: Hague court will review the case concerning the shootings on the Maidan

The Treaty of the Rome Statute was signed by 139 countries, including Ukraine. However, not all countries have ratified it, among them: Ukraine, USA, Iran, Egypt, Algeria and others.

November 16, Russia announced its withdrawal from the Rome Statute of the International criminal court. The Russian foreign Ministry believe that the work of the ICC in the framework of the investigated cases were “ineffective and one-sided”. For 14 years the ICC has delivered only four of the sentence, while spending more than $ 1 billion, the report says.

Also in Russia bothered “attitude of the ICC to the events of August 2008” – war between Moscow and Tbilisi. As you know, in October 2015, the Prosecutor of the International criminal court in the Hague, Fatou Bensouda, requested permission to start investigating possible war crimes in the Russian-Georgian war in 2008. Bensouda had evidence that “the de facto authorities of South Ossetia” killed 113 ethnic Georgians during the forced eviction of the breakaway Republic. According to the Prosecutor, during the campaign evicted about 18.5 thousand people, destroyed about five thousand homes. Bensouda also noted that the curators of the eviction and killings of Georgians, probably, was the Russian military.

On 15 November it became known that the Prosecutor of the International criminal court, Fatou Bensouda, in its report on the preliminary investigation of Ukrainian Affairs acknowledged the situation on the territory of Crimea and Sevastopol, equivalent to the international armed conflict between Ukraine and the Russian Federation. In the document, Russia’s actions on the Peninsula in March 2014 recognized occupation.

See also: Lutsenko in the Hague discussed the possibility of joint investigation of crimes against Maidan

Ratification of the Rome Statute of the International criminal court provides that crimes committed by citizens who ratified or in their territory, are under the jurisdiction of the international court in the Hague. Russia signed it in 2000, but still not ratified.

One of the most notorious trials of the ICC was the case of former Yugoslav President Slobodan Milosevic, who was tried for genocide.

Russia wants to escape from the Hague Tribunal for the annexation of Crimea and intervention in Donbass. After the institution has recognized the occupation of the Peninsula “armed conflict with the involvement of staff of the Russian army”, and confirmed the presence of Russian troops in Eastern Ukraine, Vladimir Putin signed the corresponding decree. It is a contract which provides for the investigation and punishment of crimes against humanity.