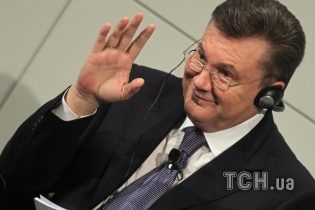 The video conference was appointed on 25 November.

On Friday, November 25, Svyatoshinsky court of Kiev will interrogate former President Viktor Yanukovych in 48 of the executed heroes of the Heavenly hundred. The video conference was appointed for 13 hours, says TSN.16:45.

The system already tested, the Russian side gave its consent. However, the prosecutors fear that it might disrupt the script of the interrogation.

The Chairman of the judicial Board in the case of the five fighters of “Berkut” Sergey Dyachuk read a confirmation from the court of the city of Rostov-on-don, Yanukovych allowed to question.

“Taken to the execution order Sviatoshynsky court of Kyiv, which came from the Main Department of justice of the Russian Federation in Rostov on hold by videoconference questioning of witnesses Yanukovych and Shulyak,” – said Dyachuk.

Prosecutors fear two things: that questioning can turn into a political-promotion of Yanukovych, and the Russian side can throw technical sabotage, if the issues are uncomfortable. In this case, answers ex-President will not be able to attach to the case materials about the shootings on the Maidan.

Became known, when will be the interrogation of Yanukovych in the case of the executed heroes of the Heavenly Hundreds

The video conference was appointed at 13 o’clock on November 25. Viktor Yanukovych will be questioned Svyatoshinsky court of Kiev. The system already tested. The Russian side gave its consent. However, the prosecutors fear that it might disrupt the script of the interrogation.

“A lot of questions for him will be a major surprise. I’m still wondering whether it would be by the court, the Rostov, where he will testify, will technically attempt to limit these issues,” – said the Prosecutor Alexey Donskoy.

Together with Yanukovych in case of dead by protesters, the court will interrogate the former head of the internal troops of Ukraine Stanislav Shulyak. He, too, fled to Russia. Today, the court also sent for re ballistics 578 Kalashnikov rifles that shot at Maidan protesters. Previous studies were done in haste. Those guns, bullets and casings, for which there is a contradiction, check again at the Kharkiv Institute of forensic Bokarius. This may delay the process of “Berkut” for a few months.

We will note, now the public Prosecutor of Ukraine Yury Lutsenko is in the Hague, where representatives of the international criminal court to discuss the possibility of joint investigations, including against Yanukovych.