Checkpoint “Marinka” was closed due to morning onstream militants 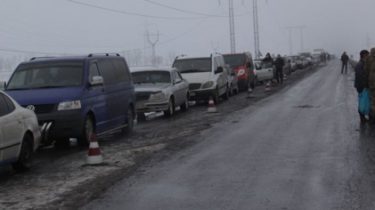 Checkpoint “Marinka” was closed due to morning onstream militants

During the shelling, no one was hurt.

Today, Wednesday, November 23, at eight in the morning the Russian militants and the occupation forces shelled the road corridors in the area ATO, as well as the positions of the border units.

Because of this, the work of the checkpoint of entry-departure “Marinka” was suspended. This is reported in state frontier service.

Read also: Militants do not release people from the occupied territories to PPC “Gnutova”

“Tonight at 8:00, militants from small arms fired at the checkpoint “Marinka” road corridor “Donetsk-Kurakhovo”. Terrorists fired from Alexandrovka, on the uncontrolled territories”, — stated in the message.

At the time of the attacks, none of civilians and personnel of border agencies was not injured.

Now work KPVV “Marinka” was restored, the passage of persons and vehicles is already possible.