Pakistan has ordered Ukraine modernization of tanks for $ 600 million 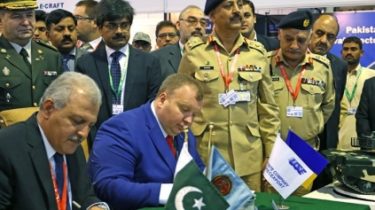 Pakistan has ordered Ukraine modernization of tanks for $ 600 million

Enterprises of the military-industrial complex of Ukraine will get an order in Pakistan for more than 600 million U.S. dollars. This was reported in the Ministry of defence.

“The agreements relate to the maintenance and modernization of tanks. As a result, the Ukrainian enterprises of the military-industrial complex will receive orders for the sum more than 600 million dollars”, – stated in the message.

Earlier it was reported that the state concern “Ukroboronprom” plans to provide Poland with the vertical actuators for the modernization of the combat vehicle PT-91 (the analogue of the T-72), which is in service with the Polish army.