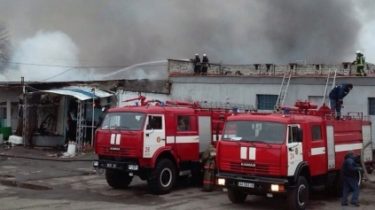 The cause of the fire is still unknown.

In the Kyiv region since the night of the burning warehouses. Inside was flammable furniture and paper. And the room itself had a lot of depth and could collapse at any moment, according to a story TSN.16:45.

1200 squares of inventory space very quickly filled up with fire. Inside was furniture. Here also produced advertising banners. Wood and paper in a matter of minutes broke out. But the centralized water supply in the warehouse district was not.

“First, our forces drove the water. Then public utilities have attracted. Now there are 8 machines that carry water,” – said chrezvychainyi.

The fire was quickly localized. Due to this, the fire did not spread to neighbouring premises. But completely to extinguish the fire was not easy, it took about 14 hours.

The extinguishing was complicated by the fact that the premises consists of several levels. To get inside – life-threatening. All of these structures can collapse. So firefighters filled the warehouse on the perimeter.

The depth of the depots of several meters, therefore many more. Only after everything is filled in, began dismantling structures and spillage.

To communicate with the owners of the premises failed. On the fire place did not have them. What was the cause of the fire – the fire will out, as they did on the warehouse safety standards. But most importantly, there were no injuries. At night there is no one but the guard was not.