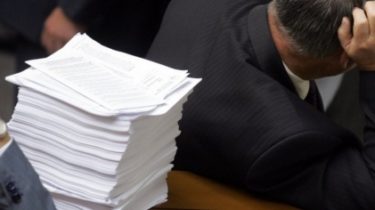 The decision to cancel all acts in one package, the Cabinet adopted today.

At this meeting, the government is one package canceled 367 regulatory acts – regulations and decisions that hinder the process of deregulation of economy and improvement of business climate in Ukraine.

“Today, we cancel more than 360 different regulations, different regulatory legal acts regulating the activities of business enterprise. We will all packs to cancel”, – assured the Prime Minister Volodymyr Groisman before the vote, which was subsequently made unanimous.

First Deputy Minister of economic development and trade Maxim Nefedov assured that removing these regulations will allow Ukraine to improve its position in the international ranking of ease of Doing business from 40 points.

“Rating is good. When a foreign investor looks at the country’s ranking for ease of doing business – it is also for him is the criterion of decision-making, it will build a plant in Ukraine, or he will look for another country. That’s good. But it is important that every Ukrainian businessman felt more free than before”, – said Groisman.

“We are talking about the abolition of 367 obsolete regulatory documents. For example, regulation of the sale of hay in the markets. Our initiatives for the IT sector: 1) the simplification of the leases for operators; 2) simplification of commissioning legaslative designs,” said Nefedov.

Read also: Rada extended the moratorium on inspections of small and medium business

Note that Ukraine took 80 place among 190 countries in the Doing Business rating-2017 in October this year released world Bank. It’s three points better than it was in last year’s ranking.

We will remind, the economy gradually Peeps out from the shadows and showing positive growth. Forecasts for Ukraine read on Dnia this link.