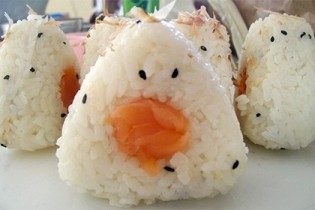 The man fell when put in the mouth of the fifth rice ball.

In Japan, the participant is eating onigiri (a national dish of fresh rice molded in the shape of a triangle or ball – ed) choked and died.

This writes The Japan Times.

15 participants of the competition had three minutes to eat five rice balls. The event is part of a campaign to promote local agricultural products, in particular, a certain brand of rice.

The man fell when put in the mouth of the fifth rice ball.

See also: the Guy who choked on gum, has been in a coma for two hours

Earlier, Serbian pensioner Branko Crnogorac, who for 20 years ate the metal, to abandon their habits after choking on a Bicycle pedal. As told by 80-year-old Crnogorac, he recently argued with friends that could eat your bike for three days. However, when it came to pedals, a pensioner suffered a choking attack – detail hit him in the throat and he was hospitalized to the nearest hospital.