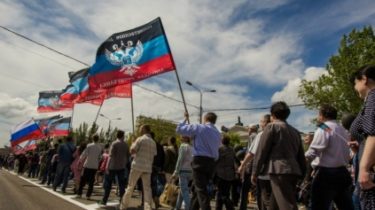 According to them, the organization entered about 20 people.

Donetsk separatists announced the opening of a cell of the public movement “Donetsk Republic” in the liberated from the militants “DNR” Slavyansk.

“We opened a primary cell in Slavyansk. About 20 residents joined our ranks,” said one of the leaders of this movement, Andrew Kramar, transmit separatist media.

According to him, “activists” understand the goals and objectives of the movement and are ready to implement them on the territory of Slavyansk.

See also: Vakarchuk in Slavyansk urged the students to get rid of the remnants of the Soviet past

We will remind, in July the day of the liberation from the terrorists celebrated in the Slavic and Kramatorsk. Two years ago the Pro-Russian mercenaries of the terrorist “DNR” left the positions they held two and a half months, and the Ukrainian army entered the city.