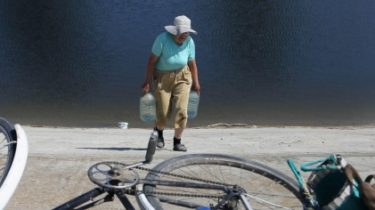 Militants two months do not want to sign the appropriate documents.

Representatives ORDO for two months to block the signing of documents regarding supply of water to inhabitants of the occupied territories of the Luhansk region.

This was reported by press Secretary of Leonid Kuchma Daria olifer on my own page on Facebook.

“It is critical for the further blocking of the agreements reached in the framework of the Tripartite liaison group on the introduction of water charges. Such a mechanism is needed for the further uninterrupted supply of water to the inhabitants of the whole Luhansk region. Despite the reached agreements and the establishment of an appropriate mechanism, the astronomical clock in for two months did not send its representative to sign the relevant documents for provision of water supply,” said olifer.

The evening of 26 August in the shelling of the Russian-terrorist troops had damaged the main power supply line near the village. The Village Lugansk.