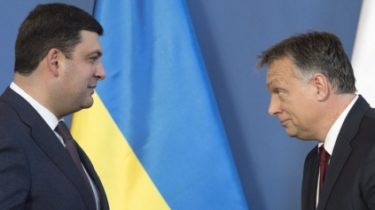 The Ukrainian Prime Minister is on a visit to Budapest.

Prime Ministers of Ukraine and Hungary Vladimir Groisman and Victor Orban had agreed on the construction of the motorway to the Hungarian-Ukrainian border.

“The interim results of my today’s visit to Budapest to prove that cooperation of Ukraine and Hungary is developing rapidly. Today Victor and Paying agreed by 2020 to build a highway to the Hungarian-Ukrainian border”, – he wrote.

In addition, according to Groisman, the foreign Ministers of the two countries together with the heads of border and customs services will process the introduction of joint border controls and improving existing checkpoint.

Also, the Ukrainian Prime Minister said that he discussed with the parties the possibility of delivery of liquefied natural gas through Hungary to Ukraine, the increase of reverse deliveries and participation of Ukrainian experts in the construction of new reactors of Paks nuclear power plant.

See also: Hungary intends to cancel for Ukrainians the payment for national visas.

Earlier it was reported that “Ukravtodor” plans to build a new roadthat will connect highway M-06 “Kyiv – Chop” with the Hungarian M-3 “Budapest – Nyiregyhaza”. Now consider two options for possible transportation. The first – reconstruction and extension of an existing checkpoint “Luzhanka”, and the second the construction of a new checkpoint in the village Dyida.