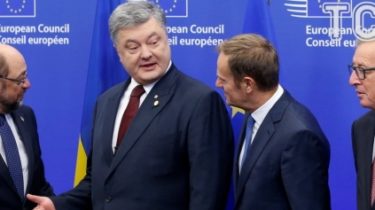 Today, 24 November, during the summit Ukraine-EU President Petro Poroshenko agreed with the European leaders about strengthening and expanding cooperation in the fight against corruption as well as in the energy sector.

The agreement was signed in the presence of the President of the European Council Donald Tusk and European Commission President Jean–Claude Juncker.

See also: Summit EU-Ukraine: bezveza yet do not give, but promised money and increasing pressure on Russia

In particular, between Ukraine and the EU signed an agreement of understanding on strategic energy partnership.

The two sides also signed an updated Memorandum of understanding on cooperation in the energy sector. It envisages the expansion of cooperation in strengthening energy security, ensuring the full integration of energy markets of Ukraine and the EU, improving energy efficiency in all sectors of energy consumption, reduction of greenhouse gas emissions and so on.

Signed a document on the financing of the event “anti-corruption initiative of the EU in Ukraine”.

“The agreement is based on the results of the implementation of the action plan on liberalization of EU visa regime for Ukraine, the execution of the contract for Ukraine on development of the state, of the EU project “Support of reforms in the sphere of justice,” the implementation of the framework Program of cooperation between the EU and the Council of Europe for the Eastern partnership countries for 2014-2017, as well as the activities of the consultative EU mission to reform the civilian security sector”, – stated in the message.

The total budget for implementation is 16,34 million euros, of which EU contribution is EUR 15 million, co-financing of the Ministry of foreign Affairs of Denmark – 1.34 million euros.

Funds should be sent to the state authorities responsible for combating corruption.

“Anti-corruption initiative of the EU in Ukraine also aims to improve parliamentary oversight of the implementation of the reforms and opportunities of the Verkhovna Rada of Ukraine to review and Refine policy and regulatory framework, including through the establishment of the international Advisory Council of the Verkhovna Rada Committee on preventing and combating corruption. The initiative will be involved in civil society and the media to implement anti-corruption measures, in particular through the promotion of “investigative journalism” and will be working with interested local authorities in the framework of the pilot project “Clean city” to demonstrate the positive changes which can bring an effective fight against corruption”, – stated in the message.

On 17 November, the ambassadors of the EU countries took the decision to start negotiations with the European Parliament on bezveza with Ukraine.