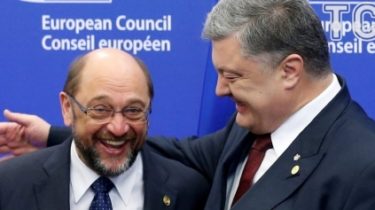 The President of Ukraine reminded of the ratification of the Association agreement between Ukraine and the EU.

The President of Ukraine Petro Poroshenko called the head of the European Parliament Martin Schulz historical figure for Ukraine. He stated this during a press conference at the summit Ukraine-EU in Brussels.
See also: Schulz called the EU member States, which vary with respect bezveza for Ukraine

Answering the journalists ‘ question about the nomination of Schulz for German Chancellor, Poroshenko said that the European Parliament President is a great politician and important person in Ukrainian history. As an example, the Ukrainian President called the joint ratification of an Association agreement between Ukraine and the EU.

We will remind, today, on 24 November, Martin Schulz said that will not be nominated for another term of presidency in the European Parliament, instead, the politician announced his intention to run for the post of Chancellor in Germany.
In Brussels, the start of the summit Ukraine-EU

European Union leaders meet with President Petro Poroshenko, will speak about cooperation between Kyiv and Brussels, the Minsk negotiations and sanctions against Russia. It is already known that the introduction of a visa-free regime at the summit is to declare will not.