Typical Russian show. As Ukrainian politicians and bloggers reacted to the questioning of Yanukovych 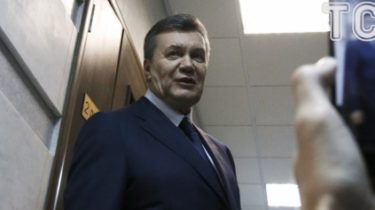 Typical Russian show. As Ukrainian politicians and bloggers reacted to the questioning of Yanukovych

The hearing was rescheduled for Monday, November 28.

On Friday, November 25, held the hearing in the case of execution of participants of Euromaidan, the witness of which is held by Viktor Yanukovych. However, due to the absence of “Berkut officers”, the meeting was moved to Monday, November 28.

This decision was taken in connection with the failure to deliver from prison the accused. Their departure was blocked by the protesters. At the exit from prison were about 30 activists with flags “Right sector” and the “Free people”. They held in hand posters with inscriptions “the Killer of hundreds of Heaven in jail”, “Blood of the Heavenly hundred on your hands” and “Killer jail.”

See also: “the Kremlin If necessary, then allow”. Feigin indignant about videotapes Yanukovych

During the meeting, Yanukovych tried to make a political statement, but it is forbidden to do a Kyiv judge. However, the President-the fugitive said that needs to deliver indictees to the meeting. He also agreed to attend a meeting on November 28.

Note that Dnia led online broadcast of the courtroom, which attracted the attention of numerous audiences. Most expressed indignation of this questioning, calling it “typical Russian show.” Speaking of the interrogation Yanukovych Ukrainian politicians and bloggers – read our material.

See also: “I am outraged”. Yanukovych commented on the postponement of the interrogation

For example, interior Minister Arsen Avakov said that Yanukovych has already provoked enough blood and troubles in Ukraine. He stressed that the Ministry would not participate “in another provocation of Moscow puppets and enter into violent conflict with the protesters”. However, Avakov said that the national police and the National guard will ensure the delivery of defendants to court as soon as there is technical possibility.

At the same time, Prosecutor General Yury Lutsenko noted that it is not necessary to expect something important from questioning Yanukovych in court. According to him, this questioning initiated protection “Berkut” suspected in the shootings on the Maidan, and brought the whole Rostov Kremlin media machine.

“I personally see this action as another PR campaign on illegitimate Kiev junta on the anniversary of the Euromaidan”, – Lutsenko noted.

“Kremlin patrons of the bloody dictator realized that the GPU is on the homestretch to the start of trials against organized criminal group of Yanukovych. And this is his last chance to speak as a witness”, – said the Prosecutor General.

Ukrainian politicians and bloggers believe that videotapes Yanukovych in the first place wants it for himself and the aggressor country, the Russian Federation, whose will he performs with the purpose of propaganda.

For example, TV presenter and blogger Sergei Ivanov noted that videotapes of the President-the fugitive – “this show is not for Ukraine, and for Russian media that spread the nonsense “legitimate” around the world”.

We will remind, on November 25 President-the fugitive should have been interrogated as a witness in the case of the shooting on the Maidan. Yanukovych himself must testify from the audience of the district court of Rostov. To depose Yanukovych in the format of the conference, the Ministry of justice sent documents to Russia twice. Because after the first query part of the documents disappeared.

The case of the shooting of 48 Ukrainians in the Institute in the Svyatoshinsky court hears and a half years. About the permission to interview Yanukovych announced on November 22, according to media reports at the hearing were about 300 accredited journalists.

The fugitive President will hear as a witness in the case of the shooting at the Maidan. Yanukovych himself at that time will testify from the hall of the Rostov regional court. To depose Yanukovych in the format of conference calls, the Ministry of justice sent documents to Russia twice.