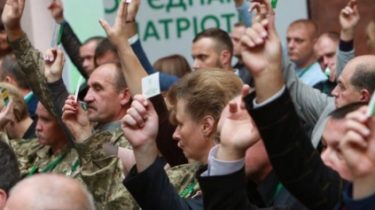 Commission under the leadership of businessman he called a Council of moral authority of the party.

Members of the “Ukrainian Union of patriots – DILL” at the next Congress re-elected the governing bodies in accordance with the requirements of the Statute. The party has a new political Council, the Presidium, audit Commission, says the story TSN.19:30.

A new political Council, the Presidium of the party and the audit Commission

Members of the “Ukrainian Union of patriots – DILL” at the next Congress was re-elected bodies according to the updated Charter. Not without surprises. Today it became known that the former head of the Dnipropetrovsk oblast Igor Kolomoisky, returned to politics.

Their consent to be elected Chairman of the party control Commission, which is also called the party court, Kolomoisky gave in a written statement – to personally attend the Congress, he could not. For his candidacy voted 415 deputies, against was no one, and one abstention. As told by the author of the historical novel “Black Raven,” the writer Vasily Shklyar, the party court is the body that supervises and checks compliance with the requirements of the Charter, oversees party discipline and ethics, as well as resolve all conflicts within the party. The Shklyar elected one of the members of the Commission of party control. “You know, this Parliament of moral authority regulates all these misunderstandings, considering such conflicts and come to some conclusion and then gives its advice directly to the leadership of the party,” explained the writer.

In the last local elections DILL became the fourth party in the country, gaining more than 7% of the vote – almost one million voters in 23 regions of Ukraine. As a result, akropoli were 7 of 26 mayors and heads of district councils. The next party Congress to elect the head of Dill, but it will be held in the new year.