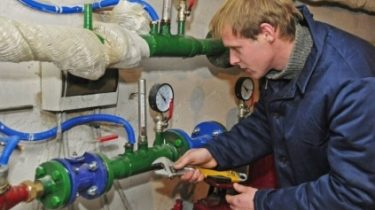 Until the end of the year 27% of homes should be equipped with heat meters.

Now in Ukraine heat meters equipped 61% of apartment buildings. Until the end of the year should set in 27% of the General figure should be 88%.

It is hoped the national Commission, carrying out state regulation in spheres of power and utilities. The regulator complains that some local authorities are not engaged in the protection of the rights of consumers and shall not affect heat-supply plant, which must install meters.

See also: “Battle” over the counter: in Chernihiv disconnected from gas high-rise buildings, and its inhabitants took “hostages”

Worst of all equipped with heat meters apartment house in Kalush, Ivano-Frankivsk oblast, Yuzhnoukrainsk in nikolayevshchina, in Kremenchug, in Poltava, Ternopil, Zhytomyr, and Lutsk.

At the same time, the national Commission assure that adjustment bills for heating depending on the actual temperature on the street has saved Ukrainians during the last heating season in total, more than 350 million UAH. The adjustment mechanism for homes without heat meters began to use a year ago, in December 2015.

“The application of the provisions referred to in decree of the Cabinet of Ministers of Ukraine from 30.10.2015 No. 1037, does not lead to any double charging fees, does not carry any methodological errors and enable consumers that do not have metering devices of thermal energy, and this heating season, to bring the billed charges for the actual values”, – assured in NKREKU.

Meanwhile, this fall, many residents received bills for heating not according to the meter readings, although they are installed, and based on the calculation in accordance with the temperature outdoors. Therefore, the amount of the payment was inflated from the actual consumption by meter reading. In “Kyivenergo” has promised to make recalculation.