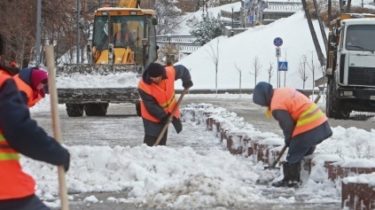 In Kiev noticed public utilities, which, as soon as the snowbegan to lay the asphalt in a Forest, at the intersection of Kyoto and Marshal Zhukov.

Video works released on his page in Facebook Vadim Dmitruk.

“Probably in the summer, the Ukravtodor didn’t have time to lay the asphalt? Metro Lesnaya. 29.11.2016. P. S. we Have, apparently, special technologies,” he said.

In turn, in a video released already responded in “Kievavtodor” and assured that the work was done by employees of “Kyivvodocanal.”

Later on asphaltroulette under snow said residents of another district of the capital. According to eyewitnesses, in the street trostyanetskaya the utility made the asphalt directly into the pile of snow, not clearing and not even looking at what is under the snow.