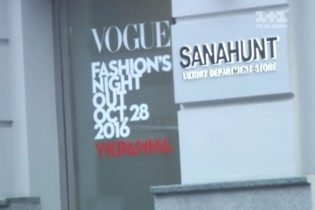 Things are in Ukraine illegally.

Shopping price of annual capital budget for a school place for the elite: the scandalous boutique “Sanahunt”, unlike the capital’s shopping centers, outlet and does not smell. While the Ukrainians are ready to fight for every cent discount from this store without any discounts being dragged full packs worth of the machine, said in the story “Pennies”.

See also: Luxury apartments were sprouting like mushrooms: the reporters found the increase in income of the family head of the Chernobyl

The journalists got the exclusive documents that were found, the most famous luxury store in the country sells outfits that are imported under the guise of cheap range for the Bazaar. Domestic elite excitedly takes out the package and doesn’t even know them or they gave a real counterfeit, or they become complicit in the crime of robbing the budget.

T-shirt world famous companies, ETRO on the website of the store “Sanahunt” worth UAH 5 570, and according to the customs Declaration, seven of these shirts in the beginning of this year was brought to Kiev with a total value of 2329,58, that is, 332 hryvnia each. Dress FENDI declarations – 2100 for one thing, and at the store it has sold over 63 630 UAH.

Journalists argue that for the money providers simply are not physically able to buy luxury clothes abroad, even the manufacturer sells wholesale. So the clothes brought into the country illegally, deliberately underestimated the cost in order not to pay taxes. As stated in the investigation, it is the most common pattern of earnings at customs. Obviously, bribes to customs cost of VIP-businessmen cheaper taxes.

It turns out that the supplier of luxury apparel – a little-known company “Triberg”, the state Director of the firm is the resident of the village of Borovka in Vinnytsia region – Sergiy Shlapak. Delivery was from Austria. Firm with a vast turnover was a residential building.

Most recently, the firm “Triberg” was liquidated as insolvent, its debt amounted to 16 million UAH. And her “business” with the same provider and the same level of the declared price inflation created by OOO “Atria Line”, drawn to a mysterious Okunevo Lyudmila from Kiev.

Journalists checked a number of suppliers of counterfeit luxury – and none found.

Meanwhile, the owner of the boutique, apparently, is living large… the Program Groshi already told you about the fatal detention of businesswoman Oksana hunt with a bunch of undeclared cash just in a box from-under footwear. Cash mistress was transported to Milan. From the homeland of luxury brands, she delivers clothes to your luxury store for the price of rags.

Experts say that to pull off such a scheme without the participation of the management of the customs impossible.