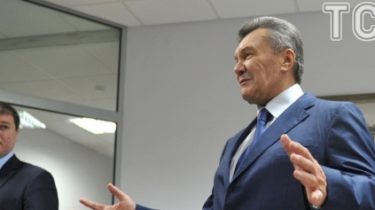 Stripped of the title of President of Ukraine Viktor Yanukovych is confident that so far has not removed the responsibility of the presidency.

On Yanukovych said during videotapes in court.

After that he asked to remove the issue.

Read also: Yanukovych assures that he was ready to perform “peace agreement”

We will note, today, November 28, during a meeting in the case of Euromaidan was questioned via video link deprived the title of President of Ukraine Viktor Yanukovych.

Viktor Yanukovych almost three years after his escape from the country and the execution of the Maidan was officially suspected of treason. The former President is testifying today in the case of the former soldiers of “Berkut”, who are accused of the murder of “hundreds of Heaven”. Questioning happens in video mode, and during judicial session Yury Lutsenko and spoke to Yanukovych the suspicion.