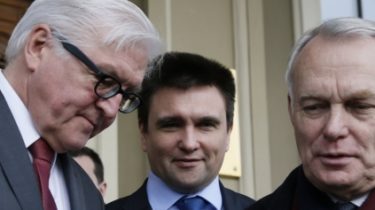 But according to him, there is hope for progress in the implementation of the Minsk agreements.

The talks in Minsk the foreign Ministers of the Normandy format on the settlement of the situation in Donbass yielded no concrete results.

This was stated by foreign Minister of Germany Frank-Walter Steinmeier, reports Radio Liberty.

The meeting participants came to a political agreement that would provide, in particular, the local elections in the occupied territories. But, he added, there is still hope of progress in the implementation of the Minsk agreements.

Steinmeier also recalled that only the full implementation of the three main agreements 2014-15 may lead to the lifting of international sanctions against Russia, imposed for its role in the conflict.

See also: proofs of aggression of the Russian Federation and the horrifying statistics of attacks: Klimkin told the details of the meeting in Minsk

Recall that “Norman” meeting at the level of foreign Ministers took place on November 29 in Minsk. There gathered the foreign Ministers of Ukraine, Germany, France and Russia. The Ukrainian delegation in Minsk will put as a priority the issues of security and humanitarian.

In Minsk ended the meeting of the foreign Ministers of Ukraine, Russia, Germany and France

The negotiations lasted for 5 hours. The Ministers of the four countries were to discuss a “road map” – a document with a list of concrete steps to resolve the situation in the Donbas. Representatives do not agree in any matter and dispersed to classrooms where each representative spoke about the results of the meeting. Pavlo Klimkin explained why the parties did not agree.