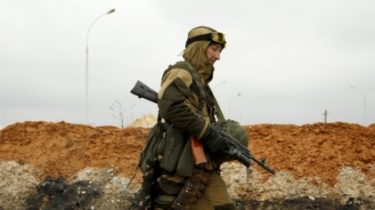 At Shirokino fired by a sniper.

On the Mariupol direction from the 120-and 82-millimeter mortars they fired at Shyrokyne. From grenade launchers and small arms – Talakovka, Water, Marinka, Pavlopil and Shyrokyne. At Shirokino fired by a sniper.

In the direction of Donetsk under fire of 82-millimetre mortars hit Novgorod, Lugansk and Avdeevka. Rocket-propelled grenades and heavy machine guns were fired Lugansk, Zaitseve, Newelski and Mironovsky.

On Lugansk – arms of the APC, grenade launchers and heavy machine guns, the occupants fired at Novoaleksandrovka and Novozvanovka. Overall, as of 18 hours, there were 29 attacks.

See also: the Blogger explained on the facts, why liberated women don’t think of captive insurgents

Earlier it was reported that the militants were going to the Christmas holidays to bring two prisoners to the people’s Deputy of Hope Savchenko.

In the capital said goodbye to Sergei Rubnikov, who died on the arc Svetlodarsk

The fighter with the call sign “witch” went to the front as a volunteer, first fought in the 131 battalion, known as the division of UNSO. This year signed a contract with the Armed Forces. He was 36 years old. Last week, during a powerful fighting near the village of Lugansk militants mortar fire covered position, where he was a fighter.