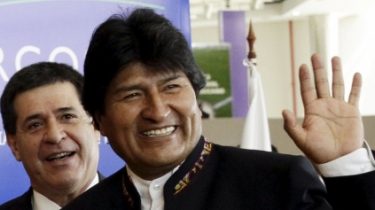 The incident caused laughter in the hall.

As you can see from the video, the phone Morales begins to emit a characteristic feminine moan, and then the President gets out of the hands of the gadget and immediately jumps to pick up the phone and turn off the video. All the action is accompanied by loud laughter.

Western edition did not fail to recall that Morales’s single and has three children from three different women. But earlier the President of Bolivia admitted that he chews Coca leaves and doesn’t see anything wrong with that.