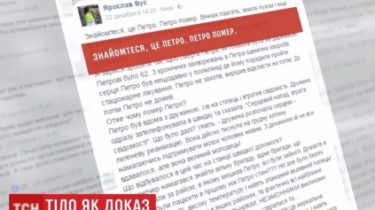 The medic tried to draw attention to the problem of false emergency calls, but provoked the condemnation of colleagues and discussions about medical ethics.

Doctor the Metropolitan ambulance Yaroslav VUS tried to draw public attention to the problem of non-core challenges. He posted on the social network Facebook is supposedly a photo and a story of a patient who has a heart attack, did not wait for the medical team, since all they are at this time served less critical patients, according to a story TSN.19:30.

“I covered my face. And this photo stimulates the brain. People are starting to understand,” he said, although many consider the act of physician ethics violation. But now the doctor himself already claims that photo did it and it was real. “This photo has led many to wonder what to call an ambulance to a child for a temperature of 37 – this is wrong,” argues the Mas.

The man tried to draw public attention to the problem of non-core challenges. Posted in Facebook like a photo and a story of a patient with a heart attack, which did not wait for the medical team, as all the “fast” was served less critical patients.

At the substation the er, where the doctor perused his entry in the social network and announced the verdict that the patient – not them. “Equipment and equipment that is used there, we have no equipment really. We are outraged by this statement and publishing the photos. As it is in any frame, neither moral nor ethical, not fit,” – said the Deputy Director of the center for emergency medicine of Kyiv Ulyana Bozhko. Does not share leadership and blame the doctor not to call an ambulance on temperature. Just vigilant for dangerous forms of influenza and can save lives of patients time if they fall into the hands of physicians.

Do not share methods of “shock therapy” in social networks and the author of one of the most popular in Ukraine, medical blogs, Natalya lelyukh. She is convinced that publishing anything in respect of a patient without the consent of the patient physician should not be. “Always in the right presentations at medical conferences is below: “with permission of the patient on posting pictures”. Even if it’s not the whole patient, as an organ, body part, not seen the face” – says the doctor. But the problem is that in Ukraine the concept of “medical error” or “violation of ethics” legally do not exist as a phenomenon. Criminal liability may occur only if the patient died or received injuries from the actions of the doctors. Less fatal cases threaten high verbal condemnation of patients and colleagues.