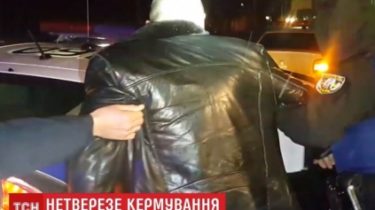 Police have issued all the documents, but did not detain a grief-the driver.

Law enforcement officers drew up reports, confiscated the identity in the head, and the culprit was released. In their opinion, grounds for the detention was not because of the accident no one was hurt. The driver visible signs of intoxication from a medical examination refused. Now he faces a prohibition to drive a vehicle in the course of the year and almost 11 thousand hryvnias of a penalty for driving while intoxicated. Liability for the accident and appropriate sanctions will be set by the court.

As reported, the man at the traffic lights crashed into the Renault of security, and then the chase began, the Hyundai Tucson crashed into a bus, then drove onto the sidewalk and crashed into a support of the Billboard.

In Kiev, a former employee of the Vinnytsia Prosecutor’s office made a triple accident

A man in an alcohol intoxication first crashed into a car security firm and started to run away. Next, hit a trolley bus finally crashed into a support of the Billboard. Fortunately, except for vehicles, no one was hurt.