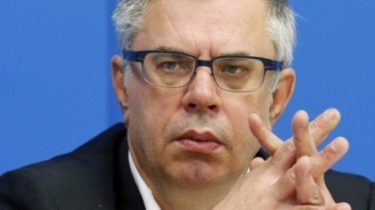 The Minister Yuriy Artemenko has confirmed the information that on December 15, the license was re-issued and extended.

The TV channel “1+1” may continue broadcasting even in the absence Blanca license because the decision is already made of the National Council on television and radio on the extension of the validity of the document.

On this edition of “Detector media”, said the Chairman of the national Council Yuriy Artemenko.

According to him, in accordance with current Ukrainian legislation, the extended license is not earlier than the last day of validity of the old.

“On December 15, the national Council has renewed and extended license “1+1″. For this decision voted by all members of the national Council. Consideration of the application of the channel lasted six months because of the numerous deficiencies with the licensee that the licensee corrected with our staff. We decided, as soon as it was rectified all the deficiencies,” said Artemenko.

He said that because of the decision on nationalization of “PrivatBank”, the national Council asked the channel to provide updated information on the ultimate beneficiaries first verbally, and on December 28 the Deputy head of the national Council Ulyana Feshchuk was sent a formal request.

“In the meantime “1+1″ we were required urgently to give them the form of the license. We answered them that I have no right to extradite before the expiry of the license – that is, no earlier than December 29. Interestingly, the law does not specify the deadline for the issue form of extended license. From our General practice, we give form to the extended license within 30 days from the date of payment of the license fee, as in the case of issuance of new licenses,” – said the Chairman of the National Council on television and radio.

According to him, the Council did not put “1+1” account for the payment of the license fee because I asked about the updated data for licenses. “They paid a license fee 23 Dec, without invoicing, and even overpaid by half. We will return half the amount,” he said.

According to members of the National Council, as a licence fee paid on 23 December 2016, the Agency has the time for the issuance of blank licenses extended until 23 January. “Why are they in such a hurry I don’t know. Perhaps it has something to do with PrivatBank”, – said Artyomenko.

Thus, according to Yuriy Artemenko, the TV channel “1+1” may continue broadcasting even in the absence Blanca license, because the decision of the national Council on the extension of the term of the license.

Recall that “1+1” has addressed to the authorities with an appeal not to deny the license of the TV station. “Today, December 29, 2016 last day of validity of licenses for analogue broadcasting of TV channel 1+1. Two weeks ago, on December 15, the national Council on television and radio broadcasting unanimously voted for the renewal and extension of the license for the channel. However, the license was never issued. During consideration of an application that lasted 6 months, no official claims to the channel has not been received. The last two weeks from different sources we get information about the attempt to cancel the decision and to seize the channel… We want to caution and warn those who are behind the attempts to disable a channel that is a daily source of news for millions of Ukrainians, even in the absence of paper, we have a legal right to continue broadcasting. Is no longer possible to intimidate us, but we hope that in 2016, in contrast to the situation three years ago, the state itself is interested in implementation of legal procedures and the work of the independent media.”