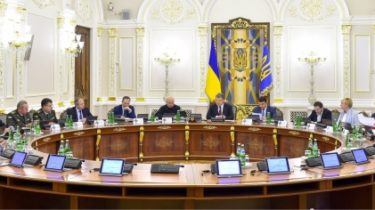 The document was discussed with the European partners.

The Council has adopted the doctrine of information security of Ukraine.

About it reports a press-service of the Ministry of information policy.

Thus, the priorities of the state policy in the sphere of information in particular are: the creation and development of structures in charge of information and psychological security, especially in the Armed forces of Ukraine, taking into account the practice of States-members of NATO; development and protection of the technological infrastructure ensuring information security of Ukraine; ensure a full covering of territory of Ukraine digital broadcasting, primarily to the border and temporarily occupied territories and the like.

The doctrine developed by the expert Council under Mindform and processed by the apparatus of the national security Council, she also includes comments from the Verkhovna Rada Committee on freedom of speech and information policy, Ministry of education, SBU, the National Institute for strategic studies.

The document was discussed with the European partners.

See photo: the national security Council, showed photos and video of the successful launch of missiles near the Crimea

Recall that in the last two months, informresurs bodies of state power of Ukraine , there were about 6,5 thousand cyber attacks, the trail leads to Russia. Hacker attacks, according to the President of Ukraine, touched objects in five departments and thirty-one of the state information resource.