Clashes near Novozvanovka and the wounded security officer. The defense Ministry reported about the situation in the Donbass 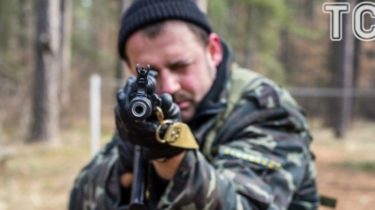 Clashes near Novozvanovka and the wounded security officer. The defense Ministry reported about the situation in the Donbass

Terrorists tried to attack the position.

The militants attempted to attack positions of the ATO under the Novozvanovka in Luhansk. This was at the briefing said the speaker of the Ministry of defense of Ukraine on ATO Col.

“During the day as a result of fighting the dead among the Ukrainian military no. One soldier was wounded in the village of novooleksandrivka”, – quotes its a quote by UNIAN.

Read also: Battle near Popasna and the shelling of settlements. The situation in the ATO zone

Motuzyanik also reported that in Luhansk direction the main event of the past days there was fighting between the ATO forces and the enemy, which happened near Novozvanovka.

“Another night of about 2 hours, our positions were shot. Then two short provocations happened in the afternoon, after 16 hours. And in the end a group of fighters, consisting of 16 men went on the attack, while they were covered with mortar fire,” – said the representative of the Ministry of defense.

The militants ran into an organized defense and well-aimed return fire from the anti-terrorist operation forces and retreated. Later there was another unsuccessful attempt of the enemy offensive. Both attacks lasted for 50 minutes. Ukrainian security forces suffered no losses.

“Thus, over the past day in Lugansk direction the enemy took place on 15 attacks and one fighting”, – summed up Motuzyanik.

In the direction of Donetsk over the past day the attacks took place in almost all the range in the second half of the day. Heavy weapons the enemy used. But the fire was long-lasting from 30 minutes to 2.5 hours. In General, this area has occurred 9 enemy attacks.

On the Mariupol direction in the settlements Talakovka and SHIROKANE yesterday, the enemy fired three positions ATO forces with mortars. While enemy fire from light weapons did not cease there almost the whole day from 12 am until late evening.

“Only in the direction of Mariupol a day recorded 23 enemy attacks,” added Motuzyanik.

Earlier it was reported that on the Mariupol direction of the 120 and 82-mm mortars terrorists fired at Shyrokyne and Talakovka From rocket-propelled grenades, heavy machine guns and small arms fired at the Water, Talakovka, Pavlopol, Maryinka, Shyrokyne, Lebedinsky and Hnutove, according to the summary of the ATO headquarters for the 30th of December.